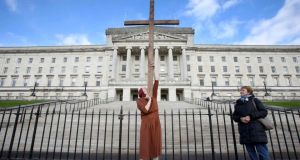 Catholic bishops in the North have said Monday was ‘a tragic day for the unborn child’ after abortion was decriminalised. Photograph: Paul Faith/AFP via Getty

The main Christian churches in Ireland have deplored the events at Stormont on Monday that resulted in the decriminalisation of abortion in Northern Ireland.

Catholic bishops and the moderator of the Presbyterian Church in Ireland, Dr William Henry, also criticised the politicians who described the attempt to block the legislation as a “stunt”.

In a statement, the Catholic bishops of Northern Ireland claimed the Westminster legislation, which came into effect at midnight on Monday and also legalised same-sex marriage in the North, had removed “all explicit protection for the unborn child up to 28 weeks of pregnancy”, creating “potentially one of the most liberal and unregulated abortion regimes in the world”.

“This is a tragic day for the unborn children who will now never bless our world with their unique and precious lives. It is also a sad day for our local democracy,” they said.

The bishops took aim at politicians from parties such as Sinn Féin, Alliance, the SDLP and the Greens, calling their criticism of the special sitting of the Assembly “deeply offensive”.

The Presbyterian moderator Dr William Henry expressed his church’s “disappointment and regret” at the failure to restore the Executive before the deadline on Monday night.

“It remains surprising that some parties have been willing to allow the UK parliament to legislate for the people of Northern Ireland without consideration of the devolution settlement, and we are disappointed that the recall of the Northern Ireland Assembly today was dismissed by some as a political stunt,” he said.

“It has always been the position of the Presbyterian Church in Ireland that decisions on devolved matters, including the sensitive issues of abortion and same-sex marriage should remain the responsibility of our locally elected MLAs,” added Dr Henry.

Dr Henry also said that the lack of power-sharing government in the North means that “many other pressing concerns will continue to remain unaddressed”.

The president of the Methodist Church in Ireland, Rev Sam McGuffin, said he was “deeply disappointed that our Northern Ireland MLAs have, through their inability to cooperate, allowed this abortion legislation to become law”.

“I wish to place on record my thanks to those organisations who have supported the right to life cause and would encourage them to continue in their efforts to bring about a change to this extreme legislation,” he said.