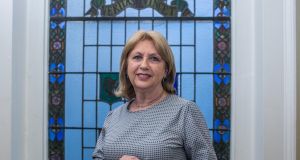 Mary McAleese: ‘It is certainly regrettable that the dominant Northern voice in the House of Commons is that of a pro-Brexit party which does not represent the view of the majority in Northern Ireland.’ Photograph: James Forde for The Irish Times

Ireland’s most senior Catholic, the Archbishop of Armagh and Primate of All Ireland Eamon Martin, was blunt when he spoke on the margins of the Catholic hierarchy’s meeting in Maynooth this week.

The archbishop was speaking as disquiet among Northern Ireland’s pro-remain community – which is largely Catholic and nationalist in sympathy – grows as the United Kingdom edges closer to a no-deal Brexit crash-out later this month.

“It is certainly regrettable that the dominant Northern voice in the House of Commons is that of a pro-Brexit party which does not represent the view of the majority in Northern Ireland. ”

However, she cautions against painting the Brexit debate in Northern Ireland in purely, or largely, sectarian terms.

“It is wrong in my view to characterise the Northern remain vote as an exclusively Catholic vote. It was not.

“The support for remain came from right across the community and the concerns about the likely baleful impact of Brexit on Northern Ireland are widely shared by people of diverse religions and politics.”

Indeed, the most effective voice for Northern Ireland’s remain voters is the North Down Independent MP Sylvia Herman, whose late husband, Jack, once led the Royal Ulster Constabulary. She has “ably represented” the cause.

In the House of Commons on Thursday, Lady Herman was scathing about British prime minister Boris Johnson’s latest proposals, saying that they proved “quite clearly, that he does not understand Northern Ireland”.

He was “perfectly happy”, she said, “to dance to the tune of his friends in the DUP”.

“He forgets or he chooses to ignore the fact, and it is a fact, that the DUP does not represent the majority of people in Northern Ireland.”

Nearly 15 years ago, Francis Campbell, from Newry in Co Down, became the first Catholic to represent the United Kingdom at the Vatican since Henry VIII broke from Rome in the Reformation.

Today, Campbell, now vice-chancellor of St Mary’s University in Twickenham, said he is “very concerned that the nuance and subtlety required to negotiate” Northern Ireland’s politics is absent in No 10.

He had, he said, been “very taken aback” at the “no surrender” and “traitor’s gate” shouts that emerged during a DUP reception at the Conservative Party conference.

So far, Johnson’s conduct in No 10 has been “very, very regressive”, Campbell added, saying he could not think of another British prime minister who would agree with such behaviour.

An understanding in British politics of “the delicate balance internal to Northern Ireland seems absent currently [in Downing Street], which sees it as a Dublin versus Northern Ireland issue”.

Paul McGrade, from Omagh, Co Tyrone, now a London lawyer following a career in the British Foreign Office and the European Commission, has been similarly disturbed.

“It is a very difficult time for people like me who decided to work in England and for an institution on the basis of the Good Friday [Belfast] agreement,” which fully guaranteed respect for identity, “British or Irish or both,” he said.

During his time in the Foreign Office, McGrade said this flexibility on identity was felt to be an advantage, especially when dealing with the European Union. Now, things are “headed back to pre-1972”.

Former British prime minister Theresa May had taken Northern Ireland’s economic and political needs seriously, even “if there was always a sense that London was using Northern Ireland to get what it wanted from the EU”.

In 1990, the then northern secretary Peter Brooke stated that Britain no longer had any selfish, strategic or economic interest in Northern Ireland. “That has been turned on its head,” McGrade said.