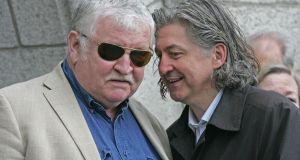 Irish actor Pat Laffan, who was best known for his roles as Georgie Burgess in The Snapper and Pat Mustard in Father Ted, has died aged 79.

Laffan was born in Co Meath and graduated from UCD with a degree in engineering before becoming a member of the Abbey Theatre Company throughout the 1960s and 1970s.

“Very sad to hear that Pat Laffan has passed away. His career at the Abbey started in 1961 and spanned five decades. He will be sorely missed,” the theatre said in a Twitter post.

Laffan later took up the role of director at the Peacock Theatre, and directed at the Gate Theatre between 1979 and 1982.

“Over the years, Pat was an incredible force in the Irish theatre community and was no stranger to the Gate throughout his prolific career as an actor and director. Our thoughts are with his family and friends,” the Gate Theatre said.

He appeared in dozens of films and television programmes including The Queen, The Boys and Girl from County Clare, Intermission, The General, The Snapper and Barry Lyndon.

He appeared in Father Ted as Pat Mustard, a promiscuous milkman who the Craggy Island clerics clashed with after he took an interest in their housekeeper, Mrs Doyle. Pauline McLynn, who played Mrs Doyle, described Laffan as “wonderful” in a Twitter post after his death.

Laffan was predeceased by his wife Eileen. His funeral Mass will take place at St Michael’s Church in Dún Laoghaire on Tuesday.