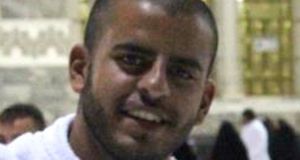 Ibrahim Halawa is in “good spirits” and looking forward to returning home to Ireland, according to the Department of Foreign Affairs.

The 21-year-old was seen by staff from the Irish Embassy in Cairo on Thursday.

The Department of Foreign Affairs said both it and the Embassy remained focused on providing every possible support to Mr Halawa so that he could return to Ireland as soon as possible.

“The Government shares the widely held sense of frustration at the delay in Ibrahim Halawa being released from prison in Cairo despite having been acquitted of the charges faced.

“The Egyptian authorities maintain that there is a process which must be followed in respect of all of the defendants in the trial, and that there are a number of steps remaining to be gone through,” said a spokesman.

“The Taoiseach has written to Egyptian president [Abdel Fattah] el-Sisi requesting his assistance to expedite the process. Minister [Simon] Coveney has also been in direct contact with his counterpart, foreign minister Sameh Shoukry, about the issue.”

Mr Halawa who is from Firhouse, Tallaght, Co Dublin, has spent more than four years in jail. The then 17-year-old was arrested along with three of his sisters – Somaia, Fatima and Omaima – on August 17th, 2013, at the Al-Fateh grand mosque in Cairo during protests against the ousting of then president Mohamed Morsi of the Muslim Brotherhood.

The defendants were all facing the death penalty but none received it.

Instead, the judge sentenced hundreds to jail terms, including 43 people to life in prison, which in Egypt is 25 years, and five years of parole.

Last month, Mr Halawa was cleared of all charges.

The department noted Mr Halawa and his family had asked it not to disclose any details relating to his return to Ireland, including travel arrangements, until he is back in the country.