‘I felt it was all my fault’: Mothers describe homeless experience in new documentary

Through The Cracks is a short documentary on the experiences of three families in homelessness, with actors voicing the real-life interviews with mothers and children. It is produced by Ingrid Casey and Bold Puppy Productions. 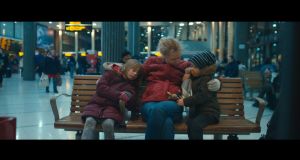 The three mothers whose testimony is used for the documentary all became homeless with their children from the private rented sector. Image: ‘Through The Cracks’

The “hopelessness” and the inability to “make things right” for their children were among the worsts things about homelessness, mothers living in emergency accommodation have said.

Their experiences, and the anxiety, shame and fear felt by their children from homelessness, are captured in a new, short documentary.

The 11-minute film, Through The Cracks, was made by visual artist Ingrid Casey with the assistance of the Bold Puppy productions. The film uses actors to deliver the testimony of three mothers who all became homeless with their children - aged between nine years and 11- from the private rented sector.

One mother described feeling like a failure. “[IT WAS] demoralising. I had worked my whole life. I felt I wasn’t able to provide for my kids. I felt it was all my fault. Like I am their mother and I can’t keep a roof over their heads. I just felt powerless and worthless and there was nothing I could do.”

Another said the “worst” aspect was her daughter, aged 11, asking repeatedly: “how much longer are we going to be here?’ How much longer?” while a third said it was seeing her son (9) give up hope.

“I know he hides a lot of it in school. If he hears the word homeless’ he thinks someone is talking about him. His school has put him forward into therapy because of his anxiety. . . He’all sit there sometimes and he’all cry, and I’all say, it won’t be for much longer. We’ll get a house soon,’ but you can see he’s lost hope, because he just answers ‘Yeah’.

“It’s the feeling of hopelessness. I am his mammy and I am supposed to make things right but I can’t make this right, and that’s what kills me the most.”

The film comes as the latest homelessness figures from the Department of Housing show there were 3,842 homeless children in 1,754 families in June. Of these, 2,858 children were in 1,352 families homeless in Dublin.

This is Ms Casey’s first film and was made, she says as she had come close to homelessness herself four years ago as a mother of three children. She felt she had to do something after the death of Danielle Carroll, a mother of two young children who took her own life in August 2017, in emergency accommodation.

“I found the mothers we interviewed to be ordinary people with the same hopes for their children as I would have - to attend extracurricular activities, to be allowed play and have basic dignity and grace in their development.”

The children interviewed all said, if they had three wishes, that their first wish would be a house, or to “get everyone a new house”.

One of the boys hated the “rules” associated with staying in a hotel: “My hobbies are Lego, sitting in, drawing and art. It annoys me tip-toeing around. It’s super annoying have to follow all the rules”.

A girl (8) spoke of missing her best friend, Holly. “We used to always play with each other but I don’t really see her that much anymore.”

Through The Cracks was released online on Thursday and can be viewed at https://vimeo.com/281291787.