Homeless families with nowhere to sleep sent to Garda stations

No other accommodation for 12 homeless families, including more than 30 children 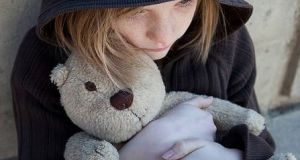 All 12 families were already homeless and “self-accommodating” on a night-to-night basis as they had not been provided with medium-term “emergency” accommodation. File photograph: iStockPhoto

Twelve homeless families, including more than 30 children, were told to go to Garda stations in Dublin on Tuesday night because no other emergency accommodation was available.

Among them were three families, recently evicted from their homes, who presented at Store Street Garda station but eventually chose instead to sleep rough in a nearby park. Other families were directed to Pearse Street and Clondalkin stations, it is understood.

All 12 families were already homeless and “self-accommodating” on a night-to-night basis as they had not been provided with medium-term “emergency” accommodation. They were unable to find hotel or B&B beds by 4pm on Tuesday, and presented at Focus Ireland’s drop-in coffee shop, at which stage staff began calling hotels.

Focus Ireland is the lead agency dealing with homeless families.

By 7pm beds had not been sourced for the 12 families, and other emergency options, including placing the families in hostels for single adults, were looked at. However, these too were full. At this point the families were directed to present themselves at their local Garda stations.

Mike Allen, Focus Ireland’s director of advocacy, described the outcome as “devastating” for the families, and also for staff who had made “several hundred” phone calls to hotels and B&Bs, and whose priority was to find safe accommodation for the families.

What happened on Tuesday night is unprecedented and shocking

He said families were often fearful of presenting at Garda stations, anxious that the children could be taken into care.

“What happened on Tuesday night is unprecedented and shocking. We have been triggering the emergency beds for families, in adult hostels increasingly, since January and nightly through April. Now we are coming into the tourism season and hotels are less likely to make beds available to homeless families.”

He said up to 200 families a night were now “self-accommodating”, seeking night-by-night bookings.

The charity reiterated its call, first made 18 months ago, that the Government “commandeer” hotel rooms so no family faced sleeping rough. It said it worked in partnership with the Dublin Region Homeless Executive (DRHE), but the Government had failed families whose housing was vulnerable.

A spokeswoman for the DRHE said it had been notified by Focus Ireland it was “actively engaged with families who were unable to source their own accommodation”.

“Dublin City Council provides an emergency supply of contingency capacity for families, all of which were invoked [on Tuesday night].”