Groups gather at beaches and mountains despite social distancing 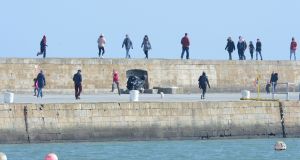 Large groups of people gathered at beaches, mountains and walking routes around the country on Sunday afternoon despite social distancing concerns and appeals from gardaí to the public to avoid such areas.

Traffic near locations including Powerscourt, Sally Gap, Glendalough and Enniskerry was extremely heavy on Sunday afternoon as people took to the mountains to go out walking during the good weather. “Please remember to practise social distancing when out and about today and avoid locations that may attract large groups of people,” An Garda Síochána said in a tweet.

Wicklow County Council announced that the upper car park at Glendalough, including the food franchises at the location, was closed from Sunday afternoon until further notice due to social distancing concerns. Likewise, car parks at Glenbarrow in the Slieve Bloom mountains, were closed until further notice.

Traffic on the route to Howth, Co Dublin, was also heavy as dozens gathered on the beach to walk their dogs, play with their children and drink alcohol with friends.

Barry Murphy from Sutton and his partner Susan took their children Sofia (5) and Leo (7) to the beach “to kick a ball, go for a walk and then go back home. We’re not interacting with others. It’s been surreal, we’re doing things differently and having to adapt, but on a nice day like today, you have to get out. We only had to walk from around the corner and an open space like the beach was an obvious place for us,” Mr Murphy said.

Similarly, Paul and Hayley Meagan drove their kids from Maynooth to Howth to “burn off a bit of energy”.

“Anything to get out of the house – same as everybody else here, I’d imagine. It’s been hard to keep the kids occupied,” Mr Meagan said. “But even at the minute, it’s quite stressful in an area where people are within two metres of you. You can see other people are feeling the same way,” he said, noting that other groups were keeping away from each other on the beach.

“We won’t stay too long, it’s literally just to get the kids out. It’s our daughter’s birthday today and we had to cancel her party, so we had to bring her somewhere,” Mrs Meagan added.

Stephen O’Dwyer has been “sick of parks” so he took his children Alex (12) and Ella (9) to the beach for the day. “My wife and I work from home and the kids aren’t at school so it’s been hard to keep them entertained. In general, people are keeping their distance though. I haven’t had to ask anybody to step back, and the kids get it, so there have been no problems.”

Though it was predominantly families visiting the beaches, some were out to see friends or take a walk with partners.

A Dublin woman who gave her name only as Orla was out drinking in the sun with a group of five friends. “Life has been quite claustrophobic and a bit lonely, if I’m honest. I live with one other woman and I haven’t seen my parents or close friends in a long time, so I’ve found it tricky,” she said.

“This is the first time in a while I’ve met a group. Today has been gorgeous and you don’t appreciate how important it is to actually see other people. It’s tough for people’s mental health. I feel there’s a stigma as well when you do meet people, even though we’re trying to keep our distance from each other.”

For Ralph Wadzinski and his partner, the visit to the beach on Sunday was for their “mental wellness”. They avoided public transport and drove to the beach for a walk. “As much as we have a chance, we’re going outside because we might be stuck inside later. But we are keeping our distance and using our common sense,” he said.