Exergaming: Fun and fitness from the comfort of your own home

These days, exercise video games disguise fitness routines in the form of role-playing, dancing or running from zombies 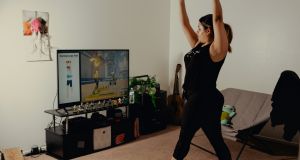 Tiffany Ruiz had tried various gyms, apps, workout routines and diets, all in an effort to get fit and lose some weight. “None of them worked because none of them kept my interest,” she said. Now, Ruiz is working out at least four times a week, thanks to a video game.

In her bedroom, she sprints, squats, stretches and performs other exercises like knee lifts and shoulder presses, all while battling a muscle-bound dragon and its toadies in Ring Fit Adventure, a new game from Nintendo, the Japanese consumer tech giant. “I am so focused on beating the high score or conquering an enemy that before I know it, 30 minutes have passed,” said the 26-year-old.

Ring Fit Adventure, created for the Nintendo Switch console, is the latest effort by the video game industry to try to entice consumers to get up off the couch and become more active. Developers are folding fitness into games as part of a dual-pronged strategy: to retain players by offering a physical twist on traditional gameplay and to draw in new ones like Ruiz who are looking to break up the monotony of working out.

The campaign appeals to parents and other caregivers worried about the amount of time children spend glued to screens. And the games help counter the stereotype of the sedentary player, sitting in a chair for hours on end. “Developers are trying to reach people who want fun and fitness at the same time,” said Rik Eberhardt, a programme manager at the Massachusetts Institute of Technology’s (MIT) Game Lab in the US. “They know fitness is good for them, but it can feel like a chore in their busy lives.”

“Exergaming,” a portmanteau of exercise and gaming, has been around since the late 1980s, when Bandai introduced Power Pad, a gray mat with pressure sensors, for the Nintendo Entertainment System. Games now use motion sensors, smartwatches and even virtual reality to track a player’s movement.

The gameplay has changed, too. Some games disguise fitness routines in the form of role-playing, dancing or other activities such as running from zombies. Others are fitness and health apps that lead users through workouts with gamelike features such as scoreboards, real-time feedback and multiplayer options.

Nintendo’s Wii game console brought exergaming into the mainstream in 2006. Its Wii Fit game incorporated a balance board so players burned calories through calisthenics and yoga.

Nintendo’s two main competitors, Microsoft and Sony, followed its lead, adding motion-detecting cameras to their consoles. Games such as Just Dance and Zumba Fitness: Join the Party, which were available on Nintendo, Microsoft and Sony consoles, were “breakout successes” in the motion era, said Mat Piscatella, an industry analyst NPD Group, a market research firm. Since then, the industry has been overturned by the rise of mobile devices, which allow games to be played on the go.

“Consumer expectations have changed dramatically,” Piscatella said. “People are no longer just playing on their TVs in their living room. They now want to be able to play games whenever and wherever.”

Zombies, Run! coaches runners to complete hundreds of missions, including one with author Margaret Atwood, in order to escape the zombie apocalypse while running a 5K. In Pokemon Go, players capture creatures in real-world locations using augmented reality and GPS on their phones.

Hoping to build on that trend, Nintendo in 2017 introduced the Switch, which functions both as a traditional console and a hand-held device. Since its launch, more than 50 million Switch consoles have been sold worldwide

“Part of the Switch is an acknowledgment that Nintendo’s main competition is no longer just Microsoft and Sony, but Apple and Google, too,” said Philip Tan, creative director of the MIT Game Lab. He added that Nintendo was drawing on its strength in creating games that bridge the digital and physical world. “Instead of trying to compete with other console makers with better cinematography, they have created an innovative new console.”

The company has focused on games, like Ring Fit Adventure, that use consoles in new ways, said Bill Trinen, a senior director of product marketing at Nintendo. “Nintendo wants to create games that encourage people to get active and motivate them to stay active.” Trinen added that the company hoped the role-playing adventure format would encourage people to play longer.

Part of Ring Fit’s popularity stems from its unique controller, a flexible resistance hoop that Nintendo calls a Ring Con. When players squeeze it, pull it or hold it above their head, their movements are tracked in the game.

But Ring Fit is attracting a growing number of fans to the gameplay. “I love it because it is this fun, goofy story that is way more intense than Wii Fit. It hides the workout, and you can’t cheat,” said Tristan Scatliffe, a 33-year-old product manager who lives in New York. “The first time I played it, I was dripping with sweat.”

Late-night talk show host Jimmy Fallon posted, on Twitter, a video of himself playing one of the Ring Fit minigames, Spinal Erectors Challenge.

Many exergames promote movement, but whether they increase physical fitness is up for debate. Critics have said they found the exercise routines underwhelming, and a study at the Baylor College of Medicine in Houston found that Wii games did not help children meet daily exercise requirements.

Some researchers are creating their own exergames. Eefje Battel, a project manager at the Sports Innovation Campus at the Howest University of Applied Sciences in Bruges, Belgium, uses Makey Makey in several of the center’s exergame projects for children. Developed by JoyLabz, Makey Makey is an “invention kit” that allows users to connect everyday objects to the internet via alligator clips and a simple keyboard.

Battel created a version of Tetris, the 1980s puzzle game in which falling blocks are manipulated to fit them in a straight line. In her version, conductors are attached to bananas and other fruit, and children have to run from fruit to fruit to move the tiles in the game.

Regardless of the fun factor, exergames are not without risks, Battel said. One element that is missing in Ring Fit, she said, is a coach to ensure that players are performing exercises correctly and safely. “If you are squatting, the system will measure movement up and down, but it won’t track posture,” she said.

Nintendo is hoping Ring Fit becomes a top-selling game as Wii Fit did in its heyday. Game analysts like Piscatella have not yet decided.

“What makes Nintendo unique is their willingness to push boundaries, and when Nintendo is really weird, they are at their best,” he said. “Ring Fit Adventure could be the biggest thing or not. It’s still hard to predict.” – The New York Times