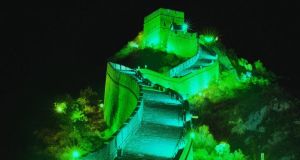 St Patrick’s Day barely registers on the calendar in China, but this year, for the first time, St Patrick is coming to Fangcaodi primary school in the capital, and students, including my 11-year-old son, are donning green clothes to celebrate the day.

For Fred, who has been in China nearly all his life, St Patrick’s Day is a fairly remote concept, and marking Ireland’s national day at school is the brainchild of one of his teachers, an American.

The Irish community marks the day in style.

A section of the Great Wall at Badaling near Beijing is being lit up in green for the occasion, and the traditional music band Altan are playing concerts around China.

There were readings of Seamus Heaney’s “Digging” poems in a large excavation site in Beijing.

During the 10 years of living here in Beijing, there has been a noticeable shift. People are less likely to ask where Ireland is when you mention where you are from, and there are fewer questions about whether it is part of England.

In an early taxi journey in Beijing after arriving more than a decade ago, the driver informed me that the reason Irish people were white was because they ate so many potatoes. Ignoring my comment that Chinese people ate a lot of rice and could be similarly coloured, he then asked how many people lived in Ireland. He was shocked to hear that the population was around the same as Chaoyang district in Beijing.

Some misconceptions aside, Ireland’s profile has never been higher in China.

In a recent poll by the travel firm Ctrip, Ireland was named “best potential destination” for 2014 and years of promoting Ireland as a place to visit and to invest in are paying off.

Part of that is down to the visit of President Xi Jinping in 2012. He was still vice-president then, but had been anointed as supreme leader, and the visit was widely covered here.

When Xi made a televised “State of the Union”-style address to the people at Chinese New Year this year, there were several photographs visible in the background, and one of them was of the president kicking a ball in Croke Park.

One particularly memorable St Patrick’s Day was in 2008, when the Irish community held a parade on the Wangfujing shopping street.

Days before the parade, there were riots in Tibet, where foreign journalists are not allowed to go without special permission. I went to Xiahe, a Tibetan area not part of Tibet per se, and home to an important monastery, with a strong security presence.

The parade in Beijing went ahead but staging similar gatherings in the intervening years in the capital and in Shanghai has been a bit more challenging, and often the Irish community has to celebrate the national day slightly more discreetly.

Sometimes Ireland pops up in unexpected places. When boarding a China Eastern plane for Shanghai, the English safety announcement has a pronounced Irish accent.

Of course the Irish pubs are busy on St Patrick’s Day, and the embassy in Beijing and consulate in Shanghai hold receptions, for both the diplomats and Chinese government representatives, and the local community.

One of the biggest food companies in China, the state-owned Shanghai company Bright Foods, was on a shopping trip to Europe recently looking for acquisition targets and Ireland was on the itinerary.

China is becoming a destination for people seeking opportunity. The biggest number of Irish in China are in Hong Kong, many of them working in financial services, but the community in the mainland is growing, as Irish people come to set up companies, teach English and trade.

A focus for many of the emigrants in China is the GAA, which is very well organised and stages tournaments for the whole country, and contributes teams to the annual Asian Games.

The Irish economic model remains of great interest to the Chinese, especially Ireland’s success in attracting IT companies like Microsoft, Intel and web firms like Google.

Innovation is a national obsession in China, as the country tries to move away from low-level manufacturing and up the value chain. Ireland’s move away from an agrarian society is seen as an inspiration.

Ireland’s economic woes of late are well known, but the Chinese are famous for taking a long-term view of things and generally recognise the positive trend.

Former president Jiang Zemin visited Shannon in October 1980, and the free trade zone there provided the model for China’s Special Economic Zones, which formed the basis for the country’s remarkable economic rise more than three decades ago. When President Xi visited Ireland, he went to Shannon to pay his respects, showing just how important Jiang’s visit was.

In the museum in Urumqi, in Xinjiang province, there are mummies from the remote desert which hail from BCE, very much pre-dating St Patrick – and are clearly Caucasian. Some scientists believe they might be Celts – early emigrants to China – because they have tartan clothes and wear felt boots, and probably spoke Tokharian, a language linked to those spoken by the Celts. Cherchen Man was found with the mummies of three women and a baby in a burial site thousands of kilometres to the east of where the Celts established their biggest settlements in southern Europe, France and Ireland.

It’ s fascinating to think of a branch of Celts leaving Austria 3,000 years ago to find a better life. Most went west and ended up in Ireland. The urge to head east is an ancient one.