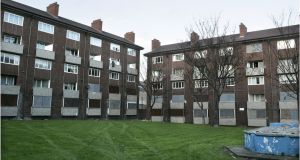 The Government is to commit to “significant expenditure” to develop “world class” social housing in north inner city Dublin as part of its response to the recent spate of gangland killings in the area.

Minister for Housing Simon Coveney and Minister for Public Expenditure Paschal Donohoe announced funding of €22 million on Wednesday for the development of new social housing apartments on Dominick Street in the north inner city. Dublin City Council is to provide an additional €7 million towards the project.

Mr Donohoe said the development was “the first wave” of the Government’s response to the spate of gangland killings.

“This is the first wave in how we respond to the tragedies that this community has faced,” he said. “The recent events in the north inner city have highlighted for us the work that needs to be done.

“The Government has decided that we need to prioritise projects like this, because at the heart of how we respond in the long-term is providing investment, jobs, decent homes for people in the community, and further services.

“That’s why it’s so important we’re seeing these homes go ahead alongside community facilities, the Luas, and the new primary school.”

The development, which will also comprise community facilities and a commercial/retail element, will facilitate the re-housing of 50 households from existing west side blocks into new homes. The development will also create 22 new homes for individuals on the council’s housing list.

Mr Coveney said the development would be replicated in other parts of the inner city. “I think we have a really good template here now for partnership that we’re going to replicate in other parts of Dublin,” he said. “That is exactly what’s needed. We want it to happen quickly so there is momentum behind the process.”

“We want to talk in a practical sense about what the Government can do to fast-track the change that is badly needed in lots of communities. We will move heaven and earth to get this process completed.

“When myself and Paschal were talking about the project the other day and approving the finance for it, we were hugely optimistic about the potential for parts of the city that need investment, and that need belief from Government in terms of committing to significant expenditure.”

Building is due to begin in the autumn, while it is expected people will be in a position to take up residence in early 2018.