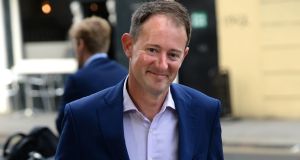 Sean Sherlock: “As the third budget of this Government approaches, there has still been little action to address the escalating costs of childcare. In many parts of the country parents are paying over €1,000 a month per child.” Photograph: Dara Mac Donaill / The Irish Times

The Government must formulate a “radical new approach” to childcare funding to address the affordability and staffing crisis in the sector, Siptu has said.

The union was responding to a report by the Economic and Social Research Institute (ESRI) which found women, particularly lone parents and those in lower income households, are being shut out of the workplace by the high cost of childcare.

“However, we also have a staffing crisis with low wages driving qualified professionals from the sector.”

Ireland currently invests just 0.2 per cent of gross domestic product in childcare. This is far behind the OECD average of 0.7 per cent and the Unicef target of 1 per cent, he said.

“The Government spends well below the OECD average on childcare but simply increasing subsidies will not guarantee a reduction in fees for parents. We need a radical new approach to childcare funding in order to reduce parental fees and increase quality.”

Labour spokesman on Children and Youth Affairs, Sean Sherlock said the Government needed to address the issue in the upcoming budget.

“As the third budget of this Government approaches, there has still been little action to address the escalating costs of childcare. In many parts of the country parents are paying over €1,000 a month per child,” he said.

“The upcoming budget in October must address high childcare costs, by providing an increased subsidy to both parents, and providers. More action is also needed to ensure staff in the sector receive a proper salary commensurate with their qualifications and duty of care to our children.”

The last budget didn’t deliver anything additional in terms of direct supports to parents, he said.

Fine Gael MEP Deirdre Clune said the Government was working hard to ensure it supported working parents and she would “urge employers” to follow suit.

“Employers can have a big influence in the success of female employees and even small changes can mean a lot. Giving females the options of more flexible work practices would go a long way to ensuring women can continue to play a vital role in the workforce. It might be allowing them to come in after the school run or work from home a day a week – whatever would work for the business and the employee should be explored.”

Business organisation Chambers Ireland said it was calling on Government to prioritise sustained, value-for-money investment in the provision of childcare and early childhood education.

“We have asked Government to deliver the prompt roll out of the affordable childcare scheme, increase funding for childcare services and conduct a value-for-money cost analysis on the delivery of childcare provision to ensure that further investment contributes to making childcare more affordable for parents.”

1 Covid-19: Two-week quarantine period for arrivals into State could be lifted for some
2 The momentum behind calls to ease lockdown may become irresistible for politicians
3 Irish planning for no-deal Brexit to restart as EU-UK talks go badly
4 New rules for arrivals to Ireland start today - what is changing?
5 Emily Maitlis thanks BBC viewers for support after Cummings row
Real news has value SUBSCRIBE