‘God must be a capitalist,’ says a disappointed man at G8 protest in Belfast 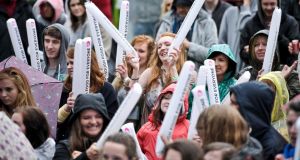 As the Ictu-organised Big March for a Fairer World marched its way up towards Belfast City Hall, a solitary young man with a union flag, part of a smaller, ongoing protest in support of that flag, taunts the anti-G8 crowd. About 30 black-clad policemen rush up from a sidestreet where they had been lined up ominously. They step between him and the protest march and “kettle” him away. They’re followed by a swarm of sensation-hungry photographers and cameramen. Despite some rumours of trouble-making anarchists and an almost surreally inflated police presence, that was the most dramatic event at this G8 protest. Later the police formed a barrier separating the flag protesters from the march.

Earlier at Custom House Square, where the march began, a woman called Belinda Loftus showed me her “World Bank”, which she created for Friends of the Earth, a stall replete with posters and leaflets modelled on bank ads. “Need a nest and a nest egg?” reads one – it features a picture of a fragile-looking planet Earth nestled in a bird’s nest. Her promotional leaflets suggest ways to “borrow” from nature ethically and contain contact information for campaign groups.

Art vs protest
She even distributes “free gifts” like a real financial institution. “You know when you join up to a bank you get a nasty pen or something?” she says. “The world gives us free offers the whole time.” The envelope she gives me features a sea-shell, collected with others from the beach near Newcastle. I like Belinda’s “world bank”. I ask her if she’s an artist. “I am,” she says. “But I don’t regard this as an artwork. Some might call it an installation. I call it an intervention.”

A man walks by in a Guantánamo-style jumpsuit. There is a cardboard cutout David Cameron peering from a van and a scale model of a fracking platform and a polluted river carried by a line of people (also from Friends of the Earth). There are people on stilts playing drums (“I’m not actually very political,” one of them, Ross Magee, tells me. “I work for a company called Streetwise. We’re hired for festivals and demonstrations.”) There’s creative chanting – “No more wars and occupation, fight for jobs and education!” – and enthusiastic use of whistles.

It’s hard to be enthusiastic. It’s wet, windy and cold. People huddle under shopfront canopies and doorways while they wait for the march to get going. Two young men in tracksuits bicker as the wind causes them to get entangled in a Socialist Party banner they’re trying to hold over their heads (“I said ‘Hold it forward!’”)

“God must be a capitalist,” says an older man gazing from beneath a pub awning. His name is Dennis Carson and he’s a rep with the Northern Ireland Public Service Alliance (this is an efficient union-run march). He’s disappointed with the turnout. “This is a chance to show solidarity with people against the G8 leaders. The place has gone to rack and ruin and I would have thought people would come out and show them what they think of the whole situation.”

He’s with his unaligned friend, Thomas McCourt, who isn’t beyond teasing. “Are those flags made locally, Dennis?” he says, pointing to the red banners. “I’d say the label says ‘Made in China or Turkey or Ethiopia’.” McCourt notes the massive police presence. “You can tell the English ones,” he says. “Their Land Rovers aren’t half as well-armoured as the Northern Irish ones.”

I still can’t see any need for that level of policing. There are, depending on who you ask, between 1,500 and 5,000 people here. There are older people, babies in buggies and even little dogs on leads. There isn’t a “black bloc” of anarchist ne’er-do-wells to be seen.

As the march sets off, it quickly becomes clear there are whole streets lined with stab-jacket-clad, big-booted and occasionally machine-gun-wielding policemen and women (some have video cameras). There are also rows of them waiting down sidestreets and convoys of armoured vehicles parked in readiness. Many have been brought in from Britain. It’s frightening (although later when I see a chuckling police woman take a photo of four face-pulling colleagues, it takes the menace away somewhat).

Dampened ardour
Kieran Allen, a UCD sociology lecturer and Socialist Workers Party member, tells me he thinks the huge concentration of police is a deliberate tactic designed to dampen protest. “It says, ‘We are the world leaders get down on your knees before us,’” he says. “It’s about intimidating people who want to protest.” He discussed this again at yesterday’s Counter-Summit run by People Before Profit, where he spoke alongside Laurie Penny and Richard Wilkinson.

None of the organisers I spoke to before or during the march anticipated any trouble. “Usually with G8, the big worry is ‘the black bloc’ [hardcore, black-clad anarchist activists] and the word we’re getting is that Northern Ireland is a bit too edgy for them,” Niall Bakewell of Friends of the Earth told me. “Yes, those radical anarchists are frightened by Northern Ireland.”

At Belfast City Hall, speakers from Ictu, Amnesty, G8 Not Welcome and other groups discuss the world leadership’s complicity in human rights violations, environmental disasters, privatisation and profiteering. They talk in global terms, but the protest is a largely local affair augmented with buses from around the island.

Armchair critics
The right to protest is a liberating thing despite the low turnout, the level of policing and the mockery of cynics. “You can sit on the sofa and give out about everything wrong with the world but if you don’t do anything about it you’re complicit in your inaction,” says Aaron Callaghan, who’s here with an anti-fracking group from Donegal.

“Your lifestyle, your shopping habits, your job . . . If you want to make it a better world, you have to get involved.”