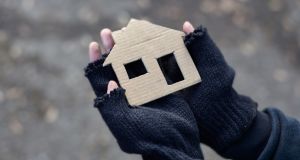 Galway Simon and Cope Galway have highlighted the growing problem of homelessness across the west. Photograph: iStock

Preliminary postmortem results have ruled out any suspicious circumstances relating to the death of Martin Carroll (29), whose body was found on the grounds of Galway City Hall earlier this week.

“A really nice young lad who had gone astray” was how the staff of homeless agency Cope Galway described Carroll, who was known to them for the past decade and more and had stayed frequently in the city’s Fairgreen Hostel.

Carroll was also known to the Garda, with a large number of convictions. As one court hearing was told, his mother died when he was young. He had become a heroin addict at the age of 18, which led him into a life of small-time crime, but had made attempts to turn his life around.

He had just completed a nine-month term in Castlerea Prison in Roscommon when he arrived back in Galway late last week.

Cope Galway has confirmed he was offered a bed on Saturday, but said he was staying with friends. On Sunday night, he was in the company of several companions outside Galway City Hall in an area of thick foliage which provides ideal cover in the elements.

As Mayor of Galway Niall MacNelis (Lab) noted, abandoned sleeping bags are regularly found under trees. Sunday was a cold night with a waxing moon and ground frost had been forecast. On Monday, his friends returned to look for Carroll, and found him lifeless.

Gardai sealed off the area, a scheduled city council meeting was postponed as a mark of respect. Carroll’s body was taken to University Hospital Galway (UHG) for a postmortem. His body was released to his family on Tuesday, with preliminary results ruling out foul play. His funeral is due to take place on Thursday in St Columba’s Church, Castlegar.

It is believed Carroll may have overdosed accidentally – the third such incident in Galway in a number of months, although inquests have still to be held to establish the precise cause of all three deaths.

Carroll’s latest custodial sentence was for trespassing at a solicitor’s office in Eyre Square, and breaking into a car at Woodquay. Galway District Court heard in May of this year that he had 62 previous convictions for burglaries, thefts, interfering with cars and drug dealing.

His solicitor said his client had been feeding a heroin addiction for the last 12 years but he was now drug-free and attending school while in prison. He had been in transitional accommodation through the homeless support services for a time.

In April 2016, he was before Galway District Court for injuring a Garda, after he was arrested during an attempt to sell heroin in the city on January 25th, 2015.Judge Aeneas McCarthy said that there were no mitigating circumstances when he imposed an 18-month term on Carroll, then 27-years-old and with an address at Fairgreen Hostel.

He had become violent after he was detained, and hit out at Garda Brendan Owens, striking him on the hand - breaking a fifth metacarpal. At the court hearing, his solicitor said his client expressed remorse, and was making a real effort to receive treatment.

Galway Simon and Cope Galway have both expressed their sympathies to Carroll’s family. Both agencies have highlighted the growing problem of homelessness across the west.

“Five or six years ago, it was unusual to see people sleeping out in Galway, but now it is becoming “normal”,unfortunately,”Cope Galway deputy chief executive Martin O’Connor says. Just last Thursday as Storm Callum approached, Cope Galway opted to keep its day centre open during the night and recorded 17 rough sleepers that night.

Tenders are being sought to provide 30 housing units with wrap around supports in Galway for 30 people who were chronically homeless under the Government’s Housing First initiative.

Cllr McNelis believes an inter-agency approach is vital for people with complex needs, and Cllr Padraig Conneely (FG) concurs that it is a “complex issue”.

The homeless agencies also believe social and affordable housing must be expedited to take pressure off emergency accommodation required for families and individuals who need it.

Galway city has been earmarked for two family hubs, but Ombudsman for Children Dr Niall Muldoon warned last week of risks of over-reliance on this short term solution.

Q&A: Government’s plan to reopen Ireland moves to the next phase on June 8th