Some obese children see themselves as a healthy size or skinny 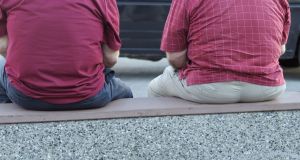 Some obese or overweight children perceive themselves to be a healthy size or even skinny, a report has found.

The latest round of data from the Growing Up in Ireland longitudinal study on child development shows 20 per cent of 13-year-olds are overweight while 6 per cent are obese.

Girls are significantly more likely to fall into these categories than boys, according to the research which traces the paths of children’s lives from the age of nine.

Funded by the State, the latest report is based on more than 7,400 interviews conducted in 2012 when the children reached the age of 13.

On the issue of weight, it found “a certain level of misperception” regarding status.

“For example, 21 per cent of the 13-year-olds whose measurements indicated that they were obese described themselves as being ‘just the right size’ or ‘very/a bit skinny’,” it found.

Once weight issues are established at this early stage of childhood, they can be difficult, but not impossible, to reverse, the report notes.

While weight issues are considered high across all 13-year-old groups, those from the lowest social class are more likely to suffer (32 per cent) than those in the highest (21 per cent).

A central tenet of the report is how social inequalities play a central role in the experience of childhood development generally. Those from lower socioeconomic backgrounds are more likely to encounter issues concerning health, education and emotional wellbeing.

Prof James Williams at the Economic and Social Research Institute (ESRI), which carries out the Growing Up in Ireland research, notes the age of nine is a critical time in life for when children transition to second-level education and undergo physical and emotional change.

“By and large they are doing okay,” he told The Irish Times. “One of the overriding messages is the inequalities and the variations. . . it’s the most disadvantaged backgrounds that are at the highest risk in terms of outcome.”

Researchers who began their work in 2007 have recently completed some interviews with the same children, now aged 20. Detailed information on 17-year-olds is due to be published early next year.

In other areas regarding 13-year-olds, about one in 10 said they had been bullied in the three months prior to being interviewed, while 2 per cent admitted to being the bully. Boys and girls are equally likely to experience such harassment.

“Having been bullied was associated with a higher risk of socio-emotional and behavioural problems,” the report finds.

Slightly less than one in 10 of those interviewed had tried smoking and about 16 per cent drinking alcohol, although many of those experiences were experimental rather than habitual. Just over 1 per cent had tried cannabis and 3 per cent sniffing glue.

The vast majority (81 per cent) were in two-parent families and most parents said they had very positive relationships with their children.

Although girls tend to like school more than boys, the children generally had a very positive relationship with education and teachers. However, those whose “main caregiver” had a higher educational attainment level were more inclined to enjoy school than those whose care giver had left school at junior certificate level.

Similarly, performance in verbal reasoning and numerical ability tests taken as part of the research was higher among those from more “socially advantaged” backgrounds.