Four isolation facilities to open for asylum seekers with Covid-19 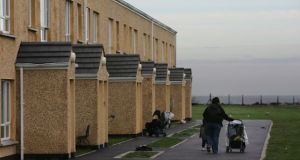 Four self-isolation facilities for direct provision residents who display Covid-19 symptoms are set to be in operation by the end of the week with one centre open since Monday, the Department of Justice has said.

The use of dedicated facilities in Dublin, Cork, Limerick and Dundalk was announced on Thursday as part of a series of measures put in place by the department to curb the spread of the virus through the State’s direct provision system.

An additional 200 beds have been made available to allow asylum seekers to socially distance and self-isolate, bringing to 850 the total number of beds procured by the department since the Covid-19 outbreak.

This includes 229 rooms with self-isolation capacity –private bedroom and bathroom – according to a statement from the department.

The 850 beds are in addition to the recently opened centres in Caherciveen in Co Kerry, Rosslare Harbour in Wexford and Tullamore in Co Offaly.

“We have partnered with the HSE and non-profit organisations to ensure that residents in our centres who require self-isolation can be cared for in these facilities which will have health and social care personnel on site,” said Mr Flanagan.

Around 600 direct provision residents have been relocated to new accommodation over the past three weeks “to support distancing in centres and cocooning measures for the most vulnerable,” said Minister of State for Immigration David Stanton.

A large number of these transfers took place last weekend with a smaller number of people moved earlier this week, the department said.

The majority of rooms procured by the department are twin rooms and can be used to house one person if they are considered to be vulnerable, according to the department.

All residents aged 65 or older have now been cocooned due to their particular vulnerability to this virus and HSE is identifying residents requiring cocooning on serious medical grounds, said Mr Stanton.

“We know that this has been challenging for our residents and centre staff and we thank them for their understanding and support.”

A national clinical telephone service offering public health advice to asylum seekers during the pandemic is also to be made available.

The department said it was “continuing to examine our needs for self-isolation on a regional basis” and expected to make further announcements in relation to this.

It is understood a number of residents in centres across the country have tested positive for the virus since the outbreak last month.

Refugee support groups continue to raise concerns around healthcare workers living in centres who leave each day to care for elderly people before returning home at the end of the day.

One female health worker, who lives in a direct provision centre in Cork but prefers not to give her name, was unable to self-isolate after developing symptoms of the virus and continued to share a bedroom and bathroom with her daughter. In the 10 days it took for her test results to come back she had to continue collecting food for cooking and money from the bank as usual.

“It’s very concerning. You’re thinking about all the people around you and you don’t even know who is vulnerable. I knew there were two kids in the centre with asthma, I was just praying they wouldn’t get it.”

The woman has recovered from the virus but must take another test before returning to work. “I’m scared of spreading this virus, it’s going to keep rotating around people here, we are mixing all the time. Moving out is the best solution.”

Another healthcare worker who was based in Dublin lost her bed in direct provision after she was transferred to Kerry in late March. She chose to return to Dublin to continue working while sleeping on a friend’s couch. However, she subsequently learned she could not return to Kerry based on new Covid-19 restrictions which require that asylum seekers who leave direct provision for one night do not return and stay with friends or family for the duration of the outbreak.

“I told them I had a job in Dublin but they said there’s nothing we can do about that because of coronavirus. How could they expect me to just abandon my job? They’re already short of healthcare staff.”

The woman, who suffers from asthma, started displaying coronavirus symptoms last week and was put on the waiting list for a test. Eight days later she’s still waiting for the test. After she became ill she was brought to an apartment in Dublin where she is currently self-isolating.

“To be honest I’m feeling depressed, I’m being pulled from one place to another and can’t do my job now because I’m in quarantine. I don’t know what’s going on, if I could stay in one place it would be a lot easier.”