Festival looks on the bright side of inner city Dublin life

Dublin's north inner city hosted a children't party to show its other side. Video: Peter Murtagh 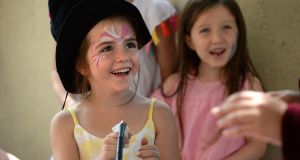 For a few hours on Wednesday, the island on Killarney Street in Dublin’s north inner city is transformed into the sort of place people who live there wish it was all the time: a playground filled with children laughing and scampering about, safe and having fun.

“Ah, it gives a lift to the community,” says a satisfied Joe Dowling, surveying the scene as he leans against the door into Hope (Hands-on Peer Education), the community group he runs with Irene Crawley.

“It’s for the kids in the area. That’s what it’s all about.”

Dowling (67) is part of the backbone of this north inner city community. His commitment to the area is evident, be it nudging young people towards a life away from drugs or the lure of gangland or badgering politicians for the resources that allow community groups to function.

But today he is leaping about with the children, urging them to do the hokey-cokey. It must be reported that his career as a singer might struggle, but not for lack of enthusiasm.

Then he is sitting on the ground doing a sort of conga bum shuffle with kids and parents, everyone’s arms in the air like an upturned centipede. The Macarena makes its presence felt and then Rock the Boat. “This one is for the ladies,” he tells the ladies.

And they all sing and dance and have a right old time of it, there beside the torch monument in memory of the many, many people from the area who have died from drug abuse.

There are about 75 children, most in the toddler to young teen age bracket, shepherded by about 20 volunteers in high-vis vests.

The children spring through an elongated bouncy castle, have their faces painted, play hopscotch, generally mess about and have a good feed of chips and burgers and nuggets and curry sauce and fizzy drink.

Hope’s small office has four desks and walls covered with photos of community events and people, some dating from the 1970s. There are also thank-you cards. The organisation, which runs on a budget of €140,000 a year, channelled to it via the HSE, seeks to help about 400 people a year, all of them with addiction problems: drugs, alcohol or gambling.

But they are not involved in dependency management and do not run methadone programmes for heroin addicts.

“We want people to get off stuff,” says Crawley (54). “We really have to work with people to instil a belief in them that they can get clean.”

And so, once a person has been through treatment elsewhere and is clean, Hope provides counselling, holistic therapies and a 12-step programme leading, hopefully, to full-time education and employment, helped by advocacy and housing.

The area has had lots of attention in recent years, but for all the wrong reasons.

“We had all those shootings and we got all the media attention and Enda Kenny came down six or seven times,” says Crawley. She speaks well of the former taoiseach and of Kieran Mulvey, whose report on regenerating the area is being implemented by a city council board on which she sits.

The street party was made possible by a donation of €3,000 from Croke Park, and midweek was selected for a reason.

“Wednesday is a bad day of the week for many people around here,” says Crawley. “A lot of people don’t have money on Wednesday.”

But on this particular Wednesday, they have sunshine and fun and a street picnic and outside the Hope office.

They could have been anywhere and from anywhere.