Inquiries or reports arising from failures in child protection

List also covers failures towards mothers of children, commissioned from 1993-2017 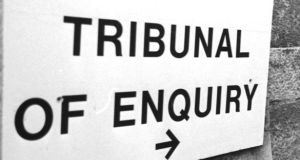 The State has been busy generating reports or inquiries. Photograph: The Irish Times

2. Report on the Inquiry into the Operation of Madonna House, Department of Health and Children, 1996.

4. West of Ireland Farmer Case, (McColgan Report). Report of an Independent Review Board, 1998.

5. Trudder House Newtownmountkennedy, Co Wicklow, 1996. Inquiry by the Eastern Health Board, not published.

7. Report of Dr Kevin McCoy on the Western Health Board Inquiry into Brothers of Charity Servicesin Galway, 2007.

8. Review of the Circumstances Surrounding the Elapse of time in Bringing to Completion the Western Health Board Inquiry into Allegations of Abuse in the Brothers of Charity Services Galway, Mr John Hynes, April 9th, 2009. Report to the Department of Health and Children.

10. Report of the Commission to Inquire into Child Abuse, May 2009.

11. Commission of Investigation, Report into the Catholic Archdiocese of Dublin, July 2009, Parts 1 and 2.

13. Inquiry chaired by Nora Gibbons into the abuse of children in a Co Roscommon family 2010-2011.

14. Case Review 1983-2002. A Report Commissioned by the Eastern Health Board and submitted to the HSE. Published by Fine Gael on their website on March 3rd, 2010.

15. The Cloyne Report by Judge Yvonne Murphy April 2011, abridged by the High Court.

16. Report of the Inter-Departmental Committee to establish the facts of State involvement with the Magdalen Laundries, 2013, chaired by Martin McAleese.

17. The Magdalen Commission Report of Mr Justice John Quirke on the establishment of an ex-gratia scheme and related matters for the benefit of those women who were admitted to, and worked in, the Magdalen Laundries, Department of Justice Equality and Law Reform May 2013

19. Conor Dignam report to the HSE concerning unpublished 2016 reports on the case of ‘Grace’ 2016