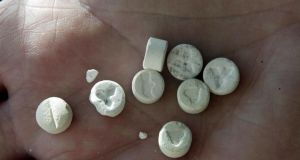 A batch of typical ecstasy pills stamped with Mitsubishi and love heart logos.

The tragic death of drama student Ana Hick, who is reported to have taken ecstasy before collapsing outside a Dublin nightclub on Saturday night, has drawn attention to the dangers of drug use among Irish youth.

While cannabis remains the drug of choice for most young adult users, ecstasy and its toxic varieties are now just as easily available at parties and festivals and on college campuses.

Ecstasy - a chemical known as MDMA, or 3,4-methylenedioxy-methamphetamine - costs as little as €6 to €10 per tablet and is often bought by one person for a group of friends before they go out, according to Thierry Mulliez, an addiction counsellor with Addiction Support and Counselling Galway.

“From what I hear from my young clients, it is often possible to purchase ecstasy in night clubs, though most prefer to have their pills ‘sorted’ before they go out,” he said.

A third of Mr Mulliez’s clients are under the age of 25 and half are students. “Ecstasy is certainly taken by most of my under-25 clients, however [it] is often consumed alongside alcohol and cannabis by students,” he said.

“Ecstasy in its pure form - MDMA powder - is also very popular as it is seems to often be cleaner than ecstasy in pill form.”

“I don’t take [ecstasy pills] often enough to have a proper dealer,” said the student, who did not wish to be named.

“I get them off friends who get them off dealers. I take them once every few months at most - at festivals and once at a rave.”

She said she had had several negative experiences with ecstasy. “There were a couple [of times] when I’d suspect the pills were laced with speed or something similar. But the worst experiences I’ve had were more to do with taking more than one pill in a night - that can make you very sick.”

A 20-year-old UCD student, who also wished to remain anonymous, said he first took ecstasy in a nightclub just after turning 18.

While he had considered the dangers of ecstasy use, his friends at the time were heavy drug users and he felt the benefits of joining them in taking pills outweighed any immediate risks.

“I had researched the effects of [ecstasy] on long-term brain functioning, but probably not sufficiently,” he said, in online correspondence.

“I’d heard ketamine can lead to a permanent loss in brain function, even in moderate use, and I wanted to make sure that [ecstasy] wasn’t the same.

“It was only after having to bring a friend to hospital that the immediate dangers became an issue for me.”

One of the dangers associated with the ecstasy market is that MDMA is often sold as PMMA (paramethoxymethamphetamine), a cheaper and more easily available drug.

The risks posed by the substance came to public attention last summer following a spate of hospitalisations linked to a PMMA product known as Blue Ghost.

The drug can take longer to kick in than ecstasy, leading users to take larger, lethal doses in quick succession, according to Tony Duffin, director of the Ana Liffey Drug Project.

“People may think they’re buying ecstasy, but it could be PMMA, which is toxic at lower doses and takes longer to act.

“The risk, then, is always that someone will think, ‘This isn’t working, it’s a dud - I’ll take another one or two’.”

Many of Mr Mulliez’s ecstasy-using clients have become ill after taking pills they suspected to have contained PMMA or PMA (paramethoxyamphetamine), he said.

“Most of my clients that regularly take or have taken ecstasy report a pretty horrible ‘buzz’ from these adulterated pills.”

While it has proved an increasingly popular drug among Irish students, the risks associated with ecstasy are not limited to the better-off, according to Mr Mulliez.

Ecstasy is used in similar frequencies across the social classes, he said, though users “from a lower social class also get involved with other Class A drugs such as crystal meth, crack and heroin more often than students or people of a middle-class background”.

Joe Barry, a HSE consultant in Public Health Medicine, agrees. “There is much more publicity about middle-class use [of ecstasy], but it is not necessarily more prevalent among particular groups.

“It isn’t as sociologically predetermined as heroin, which is much more common in poorer communities.”

Greg O’Donoghue, the Union of Students in Ireland (USI) vice-president for Welfare, said the union would discourage students from taking any drugs, rather than advise on any “safe” ecstasy use.

“Don’t be afraid to say ‘No’ if offered them. It is very important if you find yourself in a position of peer pressure that you be your own person and stand up for the dangers that surround drugs.”

The USI, he added, is currently working on a drug misuse strategy and developing relationships with various groups and organisations to provide a contact list of supports to student and welfare officers.