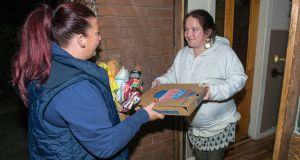 The arrival of volunteers at the door with food parcels makes “getting through the week a bit easier”, says Selina Hall, a mother-of-four living in the Crawford area of Ballyfermot, west Dublin.

“It’s great, yes. It just helps, you know, especially after the weekends when the presses are nearly bare,” she says smiling, taking the box of groceries from volunteer Yvonne Byrne.

It’s Monday night, and Byrne has packed up boxes of such items as tinned soup, pasta, tea bags, bread, tinned fish, cakes, biscuits, onions and broccoli for five families in the area.

“We do about five or six families a night, five nights a week – a different set of families each night. On this road alone we bring food to six families,” she says.

It was started by local woman Ann-Marie Gleeson in October 2014, in response to the visible increase in homelessness in the area.

“A lot of people, when they lose their homes out here, they don’t want to go into town, away from where they’re from.

“The soup runs that operate in town don’t come out here.”

Gleeson explains however that in recent months families with children began approaching them each evening looking for food.

“We decided to bring food to them in their houses, for their privacy really. Ballyfermot has always had problems with food poverty, but to see families that desperate that they’d come looking for food from a soup run for the homeless, well it shows how desperate people are.

“And people say there’s a recovery in the country. What recovery?”

The volunteers get food donations from local shops, including Tesco and Supervalu via the Foodcloud app, which allows food retailers to make surplus food - or food near its sell-by date - available to charities for distribution to the needy.

The women make vats of soup and trays of sandwiches too, while on Monday the local Dominos take-away donates pizzas.

“The kids in the houses love when we arrive with pizza on Mondays. Sometimes they come to the door almost grabbing it.

“The children can be very hungry on Mondays, after the weekends when the food is running low.”

They first feed homeless people, from 8-9pm five nights a week, and then make house calls.

They also give out Red Cross food vouchers, each of which entitles the bearer to a hot meal at the Ballyfermot Civic Centre.

Food poverty, according to the Institute for Public Health, is “the inability to afford or have reasonable access to food which provides a healthy diet”.

It is a form of chronic social exclusion, and according to a study published by trade unions Mandate and Unite in December 2013, it is experienced by more than 470,000 people – or one in 10 of the population.