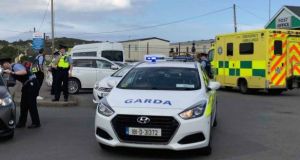 Gardaí at the scene of the fatal shooting in Clogherhead, Co Louth. Photograph: Ciara Wilkinson

Criminal intimidation within the Traveller community is causing “havoc” for an increasing numbers of Traveller families, a community worker has warned.

John Paul Collins, community development worker specialising in drugs and alcohol with Pavee Point, said drug addiction was increasing in the community. With this came the involvement of some in the illegal drugs trade.

“It has caused a lot of havoc in some Traveller communities, particularly the intimidation.”

Speaking to The Irish Times, he said the involvement of some Travellers in ongoing violence associated with a drugs feud in the Drogheda area meant many Traveller families there were living in fear.

“The key thing is that it is Traveller-on-Traveller intimidation, which is a worry. There’s an increase in it and it’s very problematic because families are fearful to report to gardaí.

“If it [reporting to Gardai] does happen, it happens on a very limited basis. There’s a mistrust anyway between the gardaí and the community and that’s one of the barriers. But because of the increase in intimidation within the community, that has brought further fear.”

A strategy was needed to build trust between gardaí and Travellers, including training for Garda recruits on Traveller issues and awareness of issues facing Travellers, was “badly needed” he said.

“That would also broaden their [Garda] horizons in dealing with the community and build trust generally.”

Mr Collins had spoken earlier on Wednesday at a conference, hosted by Pavee Point, on the Traveller Community and the National Drugs Strategy. It heard the strategy was “failing the community” and calls for greater Traveller involvement in developing drugs policies for the community.

Anna Quigley, co-ordinator of the Citywide campaign – an umbrella network of community groups responding to the drugs crisis – said it was “crucial” that responses were led by communities, including Travellers.

“People within their own communities know the issues best. It is the people, the families, who are directly experiencing the problems. They are the people who will keep going no matter what.”

It was not until last year, the conference heard, that a Traveller had a place on a sub-committee of the national drugs and alcohol force.

Dr Anne Marie Carew of the Health Research Board said of these, 28 per cent were women and 72 per cent men.

Among the Traveller cohort, women were twice as likely as men to have injected drugs (30 per cent versus 15 per cent), and also more likely to have shared needles – 12 per cent of women had shared while nine per cent of men had.