Bono met Sr Anne Carr, a Medical Missionary of Mary sister, in 2002 in Malawi where she spent 32 years caring for the very sick. Inspired by her work, he wrote ‘Crumbs from Your Table’ about her. 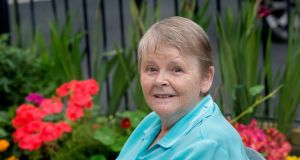 Sr Anne Carr, a Medical Missionary of Mary sister, took Bono on a tour of a hospital in Lilongwe in Malawi. “I said he was my nephew because strangers weren’t allowed in the hospital.” Photograph: Brenda Fitzsimons

The Rolling Stones may have had Sister Morphine but U2’s preference is for the altogether more savoury Sr Anne. A Medical Missionary of Mary, Sr Anne Carr, born in Dublin and raised in Cork, spent 32 years in Malawi caring for the very sick. She is subject of the band’s 2004 song Crumbs from Your Table and is looking forward to attending the band’s Croke Park concert on Saturday night as Bono’s guest.

“From the brightest star

You had so much to offer

Why did you offer your soul?”

She has since returned to Ireland where her new role involves promoting “mission awareness” of what her congregation and others do in Africa, Central and South America and elsewhere .

It was Sr Anne’s mother who first made her think of the Medical Missionaries of Mary as she had always supported them. After school she joined the congregation in 1968, training to be a nurse in Drogheda and later as a midwife in Scotland.

In 1979 she was posted to Mzuzu in northern Malawi at the maternity unit in St John’s Hospital. Later she worked on a mobile clinic which toured surrounding villages. She “loved it”, particularly the people, she said.

It was while she was in Lilongwe that Bono happened on the scene in 2002. She took him on a tour of the local 1,000-bed hospital, which was running at 300 per cent capacity. A lot of patients had HIV.

Bono was “wonderful”, she said. She also did a very Irish thing. “I said he was my nephew because strangers weren’t allowed in the hospital.” She was Bono’s very own Aunty Anne. Bono was very kind to the patients and shook hands with everyone.

Where you live should not decide

Three to a bed

Afterwards Bono made generous donations to the hospital.

In 2004 U2 released their album How to Dismantle an Atomic Bomb. The CD was sent to her in Lilongwe with a cover note saying Bono wanted her to have it, which she thought was “ very nice” and “put it in my room”.

It rested there, unheard, until another Irishwoman in Lilongwe, Anne Conway, asked her had she listened to the track Crumbs from Your Table. “It’s about you,” she said. Sr Anne listened to it then, with a mixture of embarrassment and gratitude.

Over the years she and Bono “have kept up personal contact”. He “kept inviting me to things” but, generally, she felt “too shy” to accept. An exception was Spider-Man: Turn Off the Dark, the 2010 musical by Bono and the Edge which she attended in New York.

This year and late in the day she decided she would like to attend U2’s Croke Park concert but tickets were sold out. Bono intervened directly and invited her and friends as his personal guests.

She will be accompanied tonight by an old school friend from Cork, her (real) nephew and his girlfriend.

You might say she had taken the Lilongwe to Croke Park.