Theresa May voices support for same-sex marriage in North 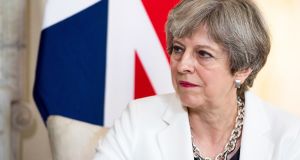 British prime minister Theresa May has expressed support for marriage equality in Northern Ireland. File photograph: Will Oliver/Pool via Bloomberg

Theresa May has expressed support for marriage equality in Northern Ireland and said she understands why LGBT+ people might be worried by the Conservatives’ confidence-and-supply deal with the DUP.

Writing in the PinkNews online newspaper, the British prime minister said that, although equal marriage rights were a matter for the devolved government in Northern Ireland, she would continue to speak out for equality.

“I want all British citizens to enjoy the fullest freedoms and protections. That includes equal marriage – because marriage should be for everyone, regardless of their sexuality,” she wrote.

“And while that is a matter for the devolved government of Northern Ireland, I will continue to make my position clear – that LGBT+ people in Northern Ireland should have the same rights as people across the rest of the UK.”

Marriage equality legislation won majority support in the Northern Assembly in 2015, but was blocked by the DUP using the “petition of concern” veto.

DUP politicians have made comments about homosexuality that were condemned as offensive by LGBT+ activists, many of whom have also criticised Ms May’s confidence-and-supply arrangement with the party.

In a radio interview on Wednesday, Ms May said she understood the LGBT+ community’s concerns, but defended the deal with the DUP as necessary to provide stable government.

“We don’t agree with them on their approach to same-sex marriage, and I’m very clear that the Conservative Party in government doesn’t agree with the DUP on those issues on LGBT rights,” she told LBC’s Iain Dale.

“We will continue to push forward, to enhance LGBT rights, and we’re pleased what we’ve been able to do so far, and we want to do more. That won’t be changed by our relationship with the DUP, which of course isn’t a formal coalition.”

The prime minister’s comments came as the Scottish and Welsh governments launched a formal dispute with Westminster over their demands for extra funding as a result of Ms May’s deal with the DUP.

They claim the £1 billion (about €1.13 billion) in new funding that is due to Northern Ireland following the deal should have resulted in “consequential” funding for the devolved administrations in Edinburgh and Cardiff under the so-called Barnett formula.

The Scottish government says that, under the funding formula, Scotland should now get an additional £2.9 billion and Wales should get an extra £1.67 billion.

However, Ms May’s government says the formula does not apply to the DUP deal, because its calculations are based solely on extra spending in England.