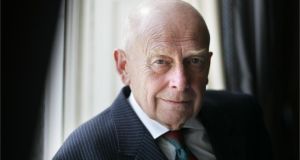 Prof Robert Harrison, chairman of the Institute of Obstetricians and Gynaecologists: “We feel that this issue has not been properly debated and that the public have not been consulted on the matter.” Photograph: Dara Mac Dónaill/The Irish Times

A group representing obstetricians has said the Government’s proposed ban on anonymous sperm and egg donations would cause legal uncertainty for medics.

In a letter to TDs and Senators, the Institute of Obstetricians and Gynaecologists said the change could “drive donor conception underground” and that there had been inadequate public consultation on it.

The Children and Family Relationships Bill, which completed committee stage in the Oireachtas last week, requires that every donor-conceived child be given the opportunity to identify their donor once they have reached 18.

“We feel that this issue has not been properly debated and that the public have not been consulted on the matter,” the institute stated in a letter by its chair, Prof Robert Harrison.

It argued that many couples were afraid to admit to having availed of donor-assisted conception abroad, which led to “serious medical problems” for mothers and babies when complications arose in pregnancy.

“As medical professionals we are now left with a troubling legal uncertainty as to our role in caring for the majority of patients who attend overseas clinics for [egg] donation and our patients are understandably anxious and concerned,” the letter stated. It said the letter was endorsed by the Irish Fertility Society.

The institute said virtually no sperm, egg or embryo donation occurred in Ireland at present using sperm or eggs donated in Ireland. Nearly all sperm used here was from Denmark, which allows anonymous and known donations, while most donor eggs come from Ukraine, where donations are all anonymous.

At the Joint Oireachtas Justice Committee last week, former minister for justice Alan Shatter warned that the Bill’s provisions would bring donor-assisted reproduction in Ireland to an end.

He told his successor, Frances Fitzgerald, her proposed ban on anonymous donation would have the “unintended consequence” of forcing couples who had difficulties conceiving to leave the State for treatment. He said it would be preferable to make provision for a mix of known and anonymous donations.

Ms Fitzgerald said it was the “strong view” of the committee that children should have access to their own genetic information. She said this opinion was shared by the Ombudsman for Children and the change would bring Ireland into line with international best practice. “I’m absolutely convinced the principle is the right principle,” she said.

Ms Fitzgerald said there was no evidence from states which had banned anonymous donation that donor-assisted reproduction stopped.

She said the Department of Health was undertaking a broader analysis of assisted reproduction and that some of the issues raised by Mr Shatter would be part of that consultation.