Disability chief who attracts controversy and kudos in equal measure

Angel Kerins has faced criticism for not disclosing her salary 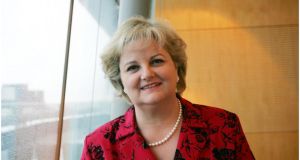 Angela Kerins: as chief executive of Rehab Group, she heads an organisation that employs about 3,800 people. Photograph: Bryan O’Brien / The Irish Times

Angela Kerins is a well-connected, lavishly paid mover and shaker who is skilled at navigating her way through the golden circle of Ireland’s political elite.

Or another view. Angela Kerins is an indefatigable worker and tough leader who has helped deliver services for the socially excluded.

It’s fair to say the former nurse and now chief executive of Ireland’s largest non-profit organisation attracts strident views, depending on who you speak to.

Expansion
As chief executive of Rehab Group, she heads an organisation that employs about 3,800 people. Its annual turnover in 2012 – the last year for which accounts are available – was €183 million.

She has doubtlessly helped to expand the organisation, boost employment and win contracts for services in the UK, Europe and Middle East.

Along the way, however, she has sparked controversy over alleged conflicts of interest, a lack of transparency over Rehab’s income and expenditure, and, most recently, the size of her salary.

At a time of austerity and strained trust in charitable institutions, her interview with Morning Ireland earlier this month – in which she declined to say how much she earned – met a vitriolic reaction.

She sought to draw a line between Rehab and charities in the glare of the media spotlight – such as the Central Remedial Clinic – on the basis they were purely State-funded agencies.

Rehab, she emphasised, received the majority of its funding from commercial activity and public money did not go towards paying senior management.

Social media cracked and hissed with anger and indignation afterwards.

While it was reported in 2011 she had a salary package worth up to €400,000, Rehab’s chairman Brian Kerr at the time dismissed the figure as “seriously inaccurate, wild and unfair speculation”.

Pay cut
He pointed out that she had taken a voluntary salary cut the previous year, paid her own travel expenses and was not in receipt of any bonus payments.

Her salary of €234,000 was revealed at Kerins’s request, according to Kerr, although this did not include other perks such as a car and pension entitlements.

There have been various accusations of excess over the years. One relates to when she arrived at Rehab’s offices by helicopter.

She told the Sunday Times in 2011 that was “private” and “nothing to do with Rehab”.

Another was that she regularly stayed in the Burlington Hotel, charging the costs to Rehab. She clarified in the same interview that she had only stayed there “once or twice”, and that was when she lived in Summerhill, Co Meath.

Much of the close attention paid to and political sniping at Kerins is, perhaps, as a result of her political links.

Born into a Fianna Fáil family, she once stood for the party’s national executive, in the early 1990s.

Various boards
From 2000 onwards, she was appointed to various boards by the Fianna Fáil-Progressive Democrat governments.

It was her role in various disability and equality bodies that sparked most controversy.

Her appointment as chairwoman of the National Disability Authority was criticised by disability campaigners on the basis that it was a major conflict of interest, given that she also headed up the largest service provider in the sector.

She was also appointed as chairwoman of the Equality Authority at a time when its budget was being slashed. Its chief executive Niall Crowley ended up resigning on the basis that the cuts were crippling the organisation, although Kerins had so such objections.

While critics saw her roles in these organisations as blindly enforcing government policy, in political circles she was seen as a safe pair of hands.

When Fianna Fáil was booted out of office, some speculated her influence might wane. Anyone who did must have underestimated her.

Shortly after the Fine Gael-Labour Government was elected, she ended up making a presentation to the Taoiseach on how to fix the economy, as part of group of business leaders called Ireland First.

And just a few weeks ago, she formed part of a trade mission to the Middle East led by the Taoiseach.