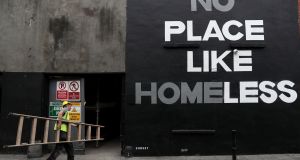 A homeless charity is to distribute water and suncream to homeless people as Ireland is set to experience a heat wave this week.

The weather is set to get hotter day by day next week with no indication yet when the upcoming heatwave will end, Met Éireann has said.

Temperatures rise steadily this week, reaching 28 degrees or more by Wednesday. Working off current forecasts there is no “peak” in sight to the warm, dry spell of weather.

Inner City Helping Homeless said their outreach teams will set up hydration points in locations around the city throughout the week to cater for those who are living on the streets.

The charity has appealed for donations of suncream and aftersun that will be distributed to homeless people during the day.

The urgent call comes after volunteers found homeless people over the weekend who were suffering with sun burn and heat stroke due to the hot weather.

“Normally we would be putting in place cold weather initiatives, but with weather due to hit the highest recorded temperatures since 1887 we must protect our most vulnerable. Hydration stations will be set up in locations that are densely populated by the homeless community and outside some of the largest hostels in order to provide water throughout the day. No public water fountains or access to water is a grave concern, especially for those who are spending extended periods on the street,” said Mr Flynn.