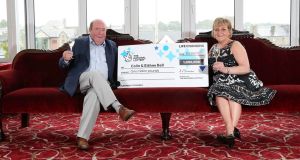 A couple who dedicated their lives to helping bereaved families after the death of their son have won the lottery.

Colin and Eithne Bell, who run a charity to assist those whose loved ones die overseas, have scooped £1 million (€1.1m) in the EuroMillions UK Millionaire Maker.

The couple from Newry, Co Down in Northern Ireland, lost their 26-year-old son Kevin in a hit-and-run incident in New York in 2013.

The harrowing experience of trying to bring his body home motivated them to set up the Kevin Bell Repatriation Trust.

In the last four years they have provided financial assistance to hundreds of Irish families confronted with similarly tragic circumstances.

Former teacher Colin (64) and Eithne (61), a retired nursery school worker, were settling in for a quiet night in front of the television last week when their evening took an unexpected but remarkable twist.

“I was watching the early evening news with Eithne when the EuroMillions numbers flashed up on screen,” said Mr Bell.

“I remembered that I’d bought a ticket for the draw but that I hadn’t checked my numbers so I took out my wallet, went online and was disappointed to see that I hadn’t matched any numbers.

“However, when I checked the unique Millionaire Maker code I was totally floored to see that it matched my code.

“I told Eithne that I thought we had just won £1 million and she laughed, thinking that I was joking.

“But when I repeated it and she saw the look on my face, she soon realised that I was being serious.”

The couple said sharing the news with each of their six children was unforgettable.

“My wife would love a sun room extension on the house and a new car and I plan to buy a couple of 10 year Premium Level Tickets for Croke Park, ” said Mr Bell.

“But we’ll spend most of it changing the lives of our children — that will bring us so much joy.”

More information on the couple’s charity can be found at www.kevinbellrepatriationtrust.com.