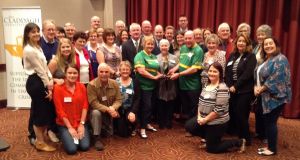 Colin and Eithne Bell with Joan Ross of the Claddagh Association (centre), and representatives of other Irish welfare organisations working around Australia, at the LINK conference in Perth. 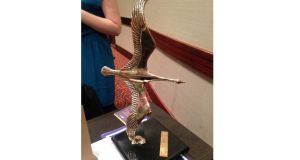 ‘Flying Home’, the sculpture presentaed to the Bell family, was created by Smith Sculptures in Perth.

It is impossible to imagine what it is like for a parent to get that call to say their son or daughter has died in tragic circumstances, especially overseas.

For Colin Bell and his wife Eithne, that call came to their home in Newry, Co Down on the morning of Colin’s 60th birthday in June 2013. Their son Kevin had been killed at the age of just 26, in a hit-and-run in New York.

In less than a week, fundraising events around Ireland, New York, and Melbourne - where Kevin had lived before moving to the US - had raised close to £150,000 for the Bell family.

Kevin’s employers in New York paid for his repatriation, so the Bell family decided to spend the money to help alleviate the financial hardship of other bereaved Irish families who have to bring home their loved ones who have died abroad, often in tragic circumstances.

Since then, the Kevin Bell Repatriation Trust has helped to repatriate about 170 Irish people back to every county in Ireland, north and south. Most have died while in Australia.

Colin and Eithne, along with their six sons and daughters, help to provide financial, emotional and practical support and advice to families, liaising with undertakers, airlines, hospitals, consulates, and Irish welfare organisations around the world. The work has all been done from their kitchen table in Newry, without any government funding.

The Bell family have been honoured in Perth this week by Irish welfare organisations from around Australia, for the work they have done to assist the families of Irish people killed while travelling or working there.

Joan Ross, president of the Claddagh Association in Perth, presented Colin and Eithne with a bronze sculpture of a wild goose in flight, describing their service to the Irish abroad, and their families at home in Ireland, as “truly remarkable”.

The sculpture, called Flying Home, was created by Smith Sculptors, Charles Smith and Joan Walsh-Smith, an Irish couple who emigrated to Australia in 1984.

The symbol on the KBRT crest is a goldfinch, because Kevin had bought his mother a bird table for Christmas one year, and he was “the only redhead in the family”.

“I see Kevin there with the birds,” Eithne said. “Birds always come home to nest, and that’s why we have the trust.”

Thanking the Irish organisations gathered at the conference from Perth, Brisbane, Melbourne, Sydney and Adelaide, who also assist the families and friends of people killed in Australia, Colin Bell said the KBRT was “getting amazing support throughout Ireland, and around the world”.

“I have travelled the length and breadth of Ireland to collect cheques, because people have taken this cause to their hearts,” he said.