Inherit property you knew nothing about? It can happen 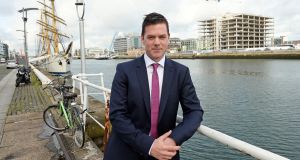 Padraic Grennan of Finders International: “The owner may have passed away and they were an only child.” Photograph: Eric Luke

“We are the people who knock on the door to say your long lost Uncle Jimmy has left you an inheritance. That’s what we do.”

Padraic Grennan, is business development manager for the Dublin office of Finders International, probate genealogists who are helping unite Irish heirs with money owed to them.

The Irish office has grown from a solo operation with just Grennan involved in 2015 to six people working for it now, as work has stepped up in the past two years.

The work of a probate genealogist involves tracing missing or unknown beneficiaries to a person’s estate when that person has died intestate, without making a will.

“You would imagine our services are not in demand but we are absolutely flat out at the minute; we’re extremely busy,” says Grennan.

County councils have begun referring derelict properties to the company but Grennan says that as the process is relatively new in Ireland, they have met some resistance.

“The service the company provides wasn’t in Ireland up until two years ago. It’s my job to convince them. Waterford county council are now referring cases to us – they referred five cases to us and we had them all solved within a matter of days,” he says.

Grennan says that although there is much overlap in cases in the UK and Ireland, there is differing legislation and crucial differences in the way the State handles intestate cases here.

When a person in Ireland dies without making a will, their estate is divided among family members on the basis of rules laid down in the Succession Act 1965.

If no beneficiaries can be found, the person’s estate, including property and savings, revert to the State. The proceeds are lodged to the intestate estate funds deposit account.

The Department of Public Expenditure and Reform says there is a procedure at present whereby details of intestate estates “where there is no known next of kin may be published in national and local press seeking next of kin to come forward.”

However it said there were no plans to publish a list of such estates on its website. “There are no further plans at present to publish any further information in relation to such estates,” a department spokesman said.

In the UK, the Bona Vacantia, a list of unclaimed estates, is published by the treasury. Probate genealogists work from it, often racing to be the first to find the beneficiaries.

Grennan says the company has put together a website, unclaimedestates.ie, listing the unclaimed estates of people in the UK who were born in Ireland and may have relatives here. At present, there are over 600 estates of people of Irish descent that have not been claimed on that website.

Finders International gets most of its Irish work from probate solicitors, who are winding up estates for people.

Once a job comes their way, Grennan and the team start by creating a family tree. They get the date and place of birth of the deceased and search for birth, death and marriage certificates to build a picture of who may be entitled to inherit.

“There are various reasons as to why a property would become vacant or derelict. Somebody might inherit properly and may not have the funds to do anything with it or they’re waiting for the market value to increase,” he says.

“There are also cases where the owner may have passed away and they were an only child or the last in their blood line and when that person dies, the neighbours are asking the solicitors, who actually owns this house now and what happens? The house typically falls into decay but we can find entitled owners to those properties and make the house saleable again,” he says.

Grennan advises people to check the unclaimedestates.ie website for their own surname or their relatives surname.

“Your long-lost relative could have left behind an estate so it’s worth a look,” he says.