Call for incentives for people to work until aged 70 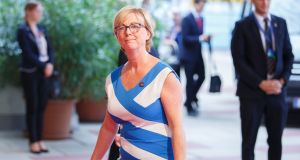 Consideration should be given to enabling older people who choose to work until they are 70, to save their contributory pension from aged 66 to take as a lump sum at retirement, the Minister for Employment and Social Protection has suggested.

Speaking at a pre-budget forum in Dublin on Friday, Regina Doherty said the department needed to consider ways to “incentivise” older people to stay at work.

She said while such a scheme was not yet “in the works” it was “absolutely” something that should be looked at.

Ms Doherty said schemes to incentivise older people to stay in work would be “much easier” than some other strategies to source workers, in a period of full employment.

“We are excluding a huge amount of available workforce from the employment opportunities that exist in Ireland. We are creating jobs faster than we have the people.

“Rather than look to immigration, [we should] look at the potential workforce we have here.” It would mean also, she said, that “we’re not looking for people to come to Ireland where we don’t necessarily have the housing or the road infrastructure for more people travelling to work”.

The Minister said her “absolute top priority” in Budget 2019 would be lifting more than 100,000 children out of consistent poverty.

“We have targets to take those 112,000 children out of consistent poverty by 2020 and that’s only two years away. If we don’t do something significant, and I mean significant, this year, well, we are not going to reach that target and that’s not something I can sit easy with.”

She said child poverty was “near top of my list last year. It is absolutely top of my list this year. There needs to be significant changes from other departments too. Significant action has to be taken.

“It’s not rocket science. We know the challenges that single-income, low-income and no-income families are facing on a daily basis and we just have to try to address those.”

Some 48 charities and voluntary organisations attended the annual pre-budget forum in Dublin.

Among their demands were a €5-a-week increase in the Qualified Child Allowance (QCA) for children over 12. The QCA, worth €31.80 a week, is paid in respect of children of adults in receipt of social welfare.

The Minister said her department’s “pot [was] limited” and she had to be “practical and realistic”, indicating there would not be an across-the-board increase in all welfare payments this year. Last year all payments increased by €5 a week.

Budget 2019 will be unveiled in October.

Sil Fox tells of ‘months of hell’ as he is cleared of sex assault on woman in bar 13:17
O’Doherty and Waters to appeal court’s dismissal of legal action 13:13
Veteran drug trafficker linked to €700,000 cash seized by gardaí 13:11
Got a moment? Help research into life under Covid-19 restrictions 12:58
More than 1,500 scientists issue funding warning and call for department for higher education and research 12:50