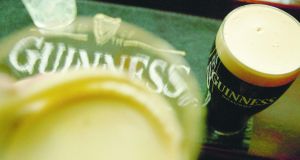 Peter O’Brien of Diageo, who is chairman of the Drinks Industry Group of Ireland, said that Arthur’s Day was “a celebration of the Irish pub” as well as of the food, drink and entertainment that existed there and it deserved support.

Blaming Arthur’s Day for Ireland’s problematic relationship with alcohol is unfair and Diageo will continue to invest in the event as long as the public supports it, a senior company executive said last night.

“We are only doing Arthur’s Day because it is what consumers have told us they want,” said marketing director Tanya Clarke.

All marketing strategies were kept under constant review by the company, but there were no plans to bow to pressure to scrap or curtail the event, she added.

She said that customer surveys showed there continued to be close to 90 per cent support for Arthur’s Day and, although she accepted that the debate surrounding the event was likely to be “heated” this week, “it would be wrong to change things for that reason”.

Peter O’Brien of Diageo, who is chairman of the Drinks Industry Group of Ireland, said that Arthur’s Day was “a celebration of the Irish pub” as well as of the food, drink and entertainment that existed there and it deserved support.

Pubs declining
He was speaking at the publication in Dublin of a report commissioned by Digi from Anthony Foley of Dublin City University business school, which said that the number of public houses in the Republic declined by 959 between 2007 and 2012 from well over 8,000. It said the total volume of the alcohol market declined by 9.9 per cent in the same period. A breakdown of the figures indicated that bar sales declined by 33 per cent.

The group, which is an umbrella organisation for the drinks sector, wants the Government to establish a task force to address the decline in local pubs and independent off-licences

Dealing with questions about the harm done to public health by alcohol abuse, Mr O’Brien said: “It is a question for [doctorsIt’] to answer how we have suddenly had this massive increase in liver disease when we have had such a significant decline in consumption.”

The report said despite significant pressure, the drinks industry still provided over €2 billion in VAT and excise receipts and more than €1 billion in exports annually. The sector also provided about 62,000 jobs across the economy.