Brendan Leahy says children have right to be raised by mother and father, where possible 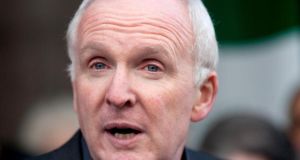 Bishop of Limerick Brendan Leahy distributed a letter referring to the same-sex marriage referendum at Churches across the Diocese of Limerick this weekend. Photograph: Arthur Ellis.

Bishop of Limerick Brendan Leahy has said that the proposed redefinition of marriage in the forthcoming referendum will have a profound impact on the public life and the personal lives of the citizens of our country.

In a letter, including specific reflections on the referendum, distributed at Churches across the Diocese of Limerick this weekend, Bishop Leahy said that the proposed “major shift” in the Constitution will have implications for the role of marriage and family.

Outlining why he individually, and as a signatory of the statement from the Bishops’ Conference, cannot support this amendment to the Constitution which redefines marriage, Bishop Leahy said that his and others’ concern on the ‘no’ side of this debate has to do with how the proposed redefinition of marriage will impact on society as a whole, on family life that is already challenged, and in particular on children who have a right, except when this is not possible, to be raised by a mother and father.

Bishop Leahy said that the debate around the referendum is an intense one, to the extent that some are choosing not to engage but he asked the faithful, in reading the letter, to do so carefully, share it with others and talk about it.

It is, he wrote, not easy to dialogue about these issues.

“But as the final days wind down to the referendum, let’s try all of us to remain respectful of each other’s view, listening to one another and, no matter what the outcome, be committed to building up a society that is good for families to be brought up in.”

Bishop Leahy said that from listening to the experiences of those in society who are passionate about or have been affected by this issue, he recognises the importance of greater sensitivity to people with a homosexual orientation and the banishing of any homophobic attitudes.

However, reflecting on marriage, he said: “Marriage as an institution is under enormous pressure in the Western world. The forthcoming Referendum is a call to Christians to rediscover the deep foundations of marriage based on the union of a man and a woman who are created to complement each other and, where possible, bring new life into the world.

“We (Bishops Conference) have pointed to our concern that should the amendment be passed, it will become increasingly difficult to speak any longer in public about marriage as being between a man and a woman. We also ask, ‘what will we be expected to teach children in school about marriage? Will those who sincerely continue to believe that marriage is between a man and a woman be forced to act against their conscience?’.

“I invite all people of faith to pray about their decision in the forthcoming Referendum. I also ask that we pray, especially during May, for marriage and the family. It is important to reflect deeply before deciding on an amendment which, if passed, would be a major change in our Constitution and our society. Indeed, Ireland would become the only jurisdiction in the world providing explicitly for same-sex marriage in its Constitution.”