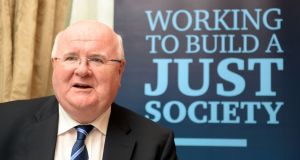 The payment of a “basic income” allowance to everyone in Ireland regardless of means would reduce the cost of bureaucracy and potentially eliminate most of the social welfare system, a conference was told on Tuesday.

Basic income is a policy approach that espouses the benefits of providing everyone with enough money to live decently and reduce State spending in other areas.

Experiments in Finland and the Netherlands have already taken place and Tuesday’s international conference at Croke Park, organised by Social Justice Ireland (SJI), debated similar concepts for Ireland and the UK.

The idea is stirring up international debate. Bernie Sanders has previously said he was “sympathetic” to the theory although has not advocated its adoption while earlier this year Swiss voters rejected a proposal to give every adult citizen about €2,380 a month.

“Basic income provides the key to resolving major challenges that changes to welfare and work have brought in the 21st century,” said Dr Seán Healy, director of SJI.

“It has the potential to reduce bureaucracy dramatically and increase respect for care work while promoting entrepreneurship and engagement with education, among other things.”

The idea is that a full basic-income payment would allow recipients to live a frugal but decent lifestyle without supplementary income from jobs.

Details of a fully-costed basic income for Ireland were presented to the conference with a hypothetical payment of €150 a week to everyone of working age and a top-up of €38 for those actively seeking employment.

This concept would be expected to eliminate most of the current welfare system but would be combined with a social solidarity fund to cover special needs.

It could be financed by a flat tax of 40 per cent and a slight increase in employers’ PRSI, still among the lowest in Europe.

An alternative approach was also outlined which would involve the introduction of a partial basic income by transforming tax credits into cash payments.

A third approach, presented at the conference by Ronan Lyons of Trinity College Dublin, would see a partial payment introduced as a universal housing subsidy.

“Given recent political developments in the UK and the US it is essential that we in the EU face up to the need for change if large numbers of people are not to be excluded,” Mr Healy.

“ Basic income is a key component of a future where these core rights are available in practice to all.”