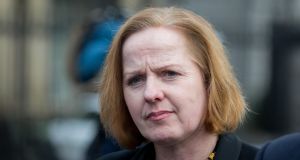 Ruth Coppinger TD: “There is not much evidence of rebuilding Ireland when less houses were built under this Minister than the last.” Photograph: Gareth Chaney/Collins

Fewer social houses were built last year than in 2015, making it the worst year for social housing construction since the 1970s.

Figures published by the Department of Housing show that some 448 units of housing were built by local authorities and housing associations in 2016, 28 fewer than the 476 built in 2015. The 2015 figure had been the lowest in over 40 years.

The highest annual output was in 1975, when local authorities built 8,794 units of housing.

The latest figures are contained in the second quarterly progress report on the Government’s “Rebuilding Ireland” plan. The plan is made up of five “pillars” and was published in July 2016.

Its second pillar, to accelerate social housing, says an additional 47,000 social homes will be provided through build, refurbishment and acquisition, up to 2021.

According to the progress report, some 18,300 units of social housing were provided during 2016. The vast majority of these (13,719) were in the private rented sector. Some 12,000 were through the housing assistance payment (HAP), a housing subsidy that is being introduced across the State to replace rent supplement. It is available in 28 local authority areas.

Although tenants may work while receiving HAP, it has been criticised because households who move to it from rent supplement are removed from the housing waiting list. They can apply to go on a “transfer list”, but critics argue households on the transfer list are far less likely to be housed in a council dwelling than those on a waiting list.

Local authorities bought 1,813 units, while 2,300 long-term voids (vacant units) were brought back into use.

The figures drew criticism from Anti-Austerity Alliance TD Ruth Coppinger, who said promises made by Minister for Housing Simon Coveney to the homeless were “hollow”.

“There is not much evidence of rebuilding Ireland when less houses were built under this Minister than the last. The Minister has absolutely betrayed the over 7,000 homeless people.

“Despite all the fanfare, the special Oireachtas committee on housing and homelessness, and the glossy document launches, nothing has emerged under this Government, as their housing philosophy is exactly the same as the last – prioritise the private sector over public home-building,” she said.

However the progress report describes the “pipeline” of social housing as “very positive”.