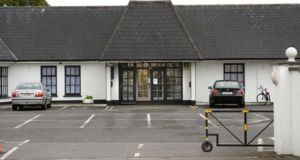 An asylum seeker who died on Tuesday was from Eritrea and had been living at the accommodation centre at the Hazel Hotel, in Monasterevin, Co Kildare for more than six months. File photograph: Dara Mac Dónaill

The Department of Justice is examining the circumstances surrounding the death of an asylum seeker whose body was found near a direct provision centre in Co Kildare on Tuesday morning.

Gardaí were called to the Hazel Hotel in Monasterevin on Tuesday morning after the body of the man was found nearby.

It is understood the man was from Eritrea and had been living at the centre for more than six months. Residents at the centre were notified of the death at midday on Tuesday.

A woman living in the centre said residents were feeling “traumatised” by the man’s death and would benefit from speaking to counsellors about the incident.

A justice spokesman said the department was aware of the “very sad death” of a resident from the centre and that the circumstances surrounding the death were being examined. Arrangements are being made for friends and family to be informed, he said.

The HSE has also been notified of the “tragic circumstances of this very sad situation” and is “mindful of the understandable upset in the Hazel hotel from both residents and staff”, he said. Arrangements are being made to provide appropriate support for anyone who requires them, he added.

A Garda spokeswoman described the death as “a personal tragedy” and said the force would not be commenting further on the incident. The death is not being treated as suspicious.

*This article was amended on Wednesday to clarify the location of the death.