Apollo House occupiers to ask court to allow them stay 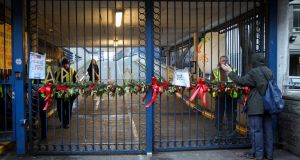 Home Sweet Home (HSH), the coalition of homeless people and activists occupying Apollo House in Dublin city centre, will on Wednesday morning ask the High Court to allow them stay.

They had been due to leave the vacant office building by noon on Wednesday, following an order by the High Court on December 21st.

Despite efforts to find alternative accommodation for all staying there before the deadline, 18 people were still sleeping there on Tuesday night.

Pat Doyle, chief executive of the Peter McVerry Trust, said some 65 residents had taken up its offers of alternative accommodation. He was confident accommodation would be found for the remaining 18.

A number of these had returned from emergency accommodation offered by Dublin City Council which they said was not suitable due to drug use on site, according to a spokesman.

The activists said they have “no option” but to seek a further stay following the council’s “failure” to provide suitable accommodation for everyone in Apollo House.

They are also angered by comments from Minister for Housing Simon Coveney on Tuesday where he suggested the group’s actions had not secured any new homelessness services.

“We are very concerned that an agreement entered into in good faith is now being reneged on,” said a HSH spokesman.

Activists said contacts with Mr Coveney over the weekend resulted in a number of “new commitments”, including two new emergency hostels in Dublin, the end of the use of hotels and B&Bs for families by July and that no one would have to leave Apollo House until their short- and long-term housing needs were provided.

Speaking on RTÉ radio on Tuesday Mr Coveney said: “Some of the information that was given out yesterday I wouldn’t necessarily agree with . . . The extra two emergency shelters that we are providing in the coming weeks and months, were agreed in advance of me meeting the HSH campaign actually.”

He said the commitment to end hotel and B&B accommodation for families was not new and that he hoped the Apollo House building would be vacant by noon on Wednesday.

He said the Apollo House residents would leave when “their human needs have been met” and not to meet the Minister’s “political ones”.

In a statement last night Mr Coveney reiterated an agreement was made after meeting with HSH activists at the weekend to “facilitate a transition to alternative accommodation in the coming days”.

He had welcomed the progress towards ending the occupation of Apollo House.

HSH has been occupying the Nama-managed building since December 15th. Receivers, Mazars, sought an eviction order at the High Court.

1 People should carry ‘evidence’ of travel reasons if exceeding 2km limit
2 Trump boasts of coronavirus ‘ratings’ as top expert warns of up to 200,000 US deaths
3 Coronavirus: Husband unable to say farewell to wife of 51 years
4 Coronavirus: Ten more deaths confirmed in Republic
5 Man who allegedly spat at garda brought to court by gardaí in protective gear
Real news has value SUBSCRIBE