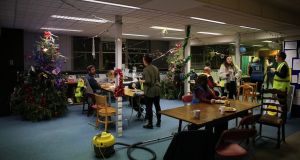 Home Sweet Home, the coalition of homeless people and activists occupying Apollo House say there has been a breakdown in trust between them and Minister for Housing Simon Coveney.

This follows comments by the Minister on Tuesday where he suggested HSH’s actions, in occupying a vacant Nama-managed building in Dublin, had not secured any new homelessness services.

They say the Minister has sought to downplay “the significant achievement reached by a citizen’s intervention in the worst housing crisis the state has ever seen”.

“We are very concerned that an agreement entered into in good faith is now being reneged on,” said a HSH spokesman.

HSH had been due to leave the vacant office building by noon on Wednesday, following an order by the High Court on December 21st. Mr Justice Paul Gilligan put a stay on the eviction order on condition no more than 40 people stay there per night.

Despite efforts to find alternative accommodation for all staying there before the deadline, 18 people were still sleeping in the Dublin city centre building on Tuesday night.

Pat Doyle, chief executive of the Peter McVerry Trust said 65 people had taken up its offers of alternative accommodation. He was confident accommodation would be found for the remaining 18.

Eight of those who had moved out of Apollo House returned from the emergency accommodation offered by Dublin City Council which they said was not suitable due to drug-use on-site, according to a HSH spokesman.

The activists say they will not leave the building if it means any resident sleeping rough.

They are also angered by comments from Mr Coveney which they say amounted to an “undermining” of agreements reached between him and HSH.

A seven-hour meeting last Friday between the Minister and HSH ended without agreement. Further contacts over the weekend resulted, according to HSH, in a number of “new commitments” from Mr Coveney on addressing the housing crisis.

Among these, HSH said on Monday, were that two new emergency hostels would open in Dublin, the use of hotels and B&Bs to accommodate families would end by July 1st, 2017, and that no one would have to leave Apollo House until their short- and long-term housing needs were provided for.

Speaking on RTÉ radio’s Sean O’Rourke Show on Tuesday, the Minister said that “some of the information that was given out yesterday I wouldn’t necessarily agree with . . . the extra two emergency shelters that we are providing in the coming weeks and months were agreed in advance of me meeting the HSH campaign actually”.

He said the commitment to end hotel and B&B accommodation for families by July was not new and that he hoped the Apollo House building would be vacant by noon on Wednesday.

He said the Apollo House residents would leave when “their human needs have been met” and not to meet the Minister’s “political ones”.

A HSH spokesman said; “The agreement . . . resulting from lengthy negotiations set out the terms by which Home Sweet Home and the Department of Housing would amicably conclude the occupation of Apollo House and take serious measures to address the housing emergency.

“Recent statements from the Minister, coupled with feedback from Apollo residents who had recently been placed in substandard accommodation, have introduced doubt into the proceedings.”

HSH have been occupying the Nama-managed building since December 15th to provide accommodation to rough-sleepers. Receivers, Mazars, sought an eviction order at the High Court, citing health a safety concerns for the residents and the unsuitability of the building.

Neither the Department nor Dublin City Council would comment.

In a statement on Tuesday night, Mr Coveney reiterated that an agreement was made with Home Sweet Home activists at the weekend to facilitate a transition to alternative accommodation in the coming days.

He said he had welcomed the progress towards ending the occupation of Apollo House.