Kenny took letter from priest, suspended for views on Catholic teachings, to pope during visit 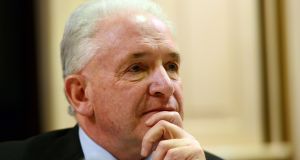 Fr Tony Flannery was disciplined by the Vatican’s Congregation for the Doctrine of the Faith (CDF) for views he expressed on Catholic teachings in 2012, the year prior to Pope Francis’s election. File photograph: Alan Betson/The Irish Times

A letter from a priest who was suspended from public ministry was taken to Pope Francis by Taoiseach Enda Kenny when he met the pontiff on November 28th last. A spokesman for the Taoiseach confirmed the letter was delivered as Fr Tony Flannery had requested.

Fr Flannery was disciplined by the Vatican’s Congregation for the Doctrine of the Faith (CDF) for views he expressed on Catholic teachings in 2012, the year prior to Pope Francis’s election.

The priest has also announced that he will ignore this suspension from public ministry by celebrating Mass on Sunday 22nd of January next at 2.30pm in the Killimordaly Community Centre near where he lives in east Galway.

It will mark his 70th birthday on January 18th.

Announcing this decision to publicly break the Vatican directive, Fr Flannery said: “Having spent 40 years of my life ministering as a priest, I am now into my fifth year when I am forbidden by church authorities to minister publicly. I have decided to honour my age, and my lifetime, by ignoring the church censures, and celebrating a public Mass.

“Since I would not be allowed to do so either in a Catholic church or other Catholic controlled building, I have chosen, with the kind permission of the committee, to celebrate it in the local community hall in the village where I now live.”

He was not celebrating this Mass “for the sake of defying church authorities,” he said. But it was the case that “the Mass, the Eucharist, is not in the ownership of the Congregation for the Doctrine of the Faith, or indeed of the Vatican. It belongs to the believing communities,” he said.

In his letter to Pope Francis, as delivered by the Taoiseach, Fr Flannery recalled how “since 1994, the credibility of the Catholic Church in Ireland has been severely damaged due to the clerical sexual abuse problems. This led to many people, even committed Catholics, asking serious questions about the structure and practices of our church, and the reasons why church authorities failed to deal properly with the emerging scandal.”

He continued that “six Irish priests who sought in their writings to examine these questions were censored by the CDF since 2006.” He himself was “most severely censored, as I am forbidden to minister publicly as a priest.”

The main concerns of the priests who were disciplined were that, in its dealings with them, the CDF had failed “to act in accordance with the principles of natural justice: We were accused and judged to be in error before we had any knowledge that a case was being prepared against us.”

Condemnations and punishments “were communicated to us indirectly, through our religious superiors. We were never given the dignity of being addressed directly. We were not given any opportunity to explain or defend our positions, or to put them into the context of the situation in which they were written. We were not informed as to the identity of the people who made complaints about us to the CDF. We did not have any opportunity to cross examine our accusers.”

When the Irish bishops or papal nuncio were questioned on the priests’ situation, “they say that they are helpless to intervene and that it is strictly a matter for our religious superiors, even though there is clear documentary evidence to show that our superiors acted always under orders from the CDF.”

Fr Flannery hoped, in light of Pope Francis’s proposed visit to Ireland, “ that our situations might be looked at in a new and more just fashion.” He concluded by expressing “great respect, and appreciation for all you are doing to renew our church. ”