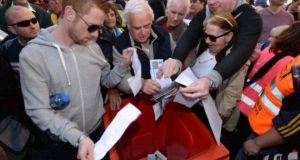 A large meeting to organise non-payment of water bills will take place on June 7th, anti-water charge campaigners have announced.

The Non-Payment Network said the meeting will be used to devise a national strategy for the non-payment of bills which will involve further protests.

Socialist TD Ruth Coppinger and People Before Profit TD Richard Boyd Barrett are supporting the event, which will take place at the Pavilion at the Red Cow Hotel in Dublin.

Organiser Dave Murphy said the meeting will be open to the public and will provide information on not paying water charges as well as setting out plans for the campaign.

He said the Non-Payment Network, which is distinct from the Right2Water campaign group in that it doesn’t have trade union affiliation, believes the system can be overwhelmed if enough people refuse to pay the water charge.

Under new legislation, Irish Water will be able to go to court and seek an attachment order to deduct unpaid bills from a householder’s earnings or social welfare.

But Mr Murphy said if enough people refuse to pay their charges then the system won’t be able to cope with thousands and thousands of requests for attachment orders.

Mr Murphy said the meeting at the Red Cow Hotel will also discuss the possibility of running candidates in the general election.

He said campaign groups were particularly active in areas such as Cobh, Co Cork and parts of Westmeath and that there could be enough support there to put candidates forward.