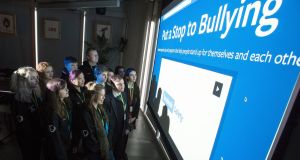 Joshua Whelan and Aoibhinn Fox, students from Colaiste Bhaile Chlair in Galway, were among anti-bullying ambassadors who have been trained by The Diana Award charity, and came to Facebook to look at the site’s tools for tackling online abuse and harrassment.Photograph: Dave Meehan/The Irish Times

Student anti-bullying ambassadors from around Ireland and Britain gathered at Facebook’s Dublin headquarters on Friday to share their experiences and learn techniques to combat cyber-bullying in schools.

“Bullying is sadly not a new phenomena,” said Facebook’s European, Middle East and Asia Safety policy manager Julie de Bailliencourt. “But we want to make sure students know who to turn to and to be aware of the online reporting tools available to them.”

She said the essence of the programme was empowering young people and teaching them what is and what is not acceptable in the online world.

Ms Bailliencourt pointed out that while there are now than 1.5 billion Facebook accounts people were still only starting to “understand what social etiquettes online look like” and she said its anti-bullying programme was “very much about education and awareness. Sometimes people forget about the human being behind the screen”.

As part of the day the group of student ambassadors learned how to get the best out of Facebook’s reporting tools and they were also encouraged to to give feedback on how efficiently those tools work. They also developed presentations to take back to their schools to educate their peers and parents on safety.

“The biggest thing is awareness,” the head of the Diana Awards anti-bullying campaign Alex Holmes said. “We believe that young people are the best placed to educate their peer about how to change the culture but we want everyone to feel they have a part to play in this.”

Two students from Coláiste Bhaile Chláir in Co Galway were trained by the Diana Award and were at the event.

Aoibhinn Fox from Carnmore said that “social media is everywhere” and said that Facebook was the most important such platform for people of her generation. She said the even if her understanding of bullying and how to combat it “could help just one person it will have been worthwhile”.

Her sentiments were echoed by class mate Joshua Whelan from Knocknacarra who said that while “cyberbullying has majorly decreased over the years” people should not be complacent and the programme would better equip him to inform his peers and teachers about the ways to combat it.