From cells and DNA to cloning and biochemistry, here are life’s milestones 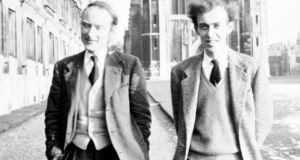 Francis Crick and James Watson made the greatest biological discovery of the 20th century when they solved the structure of DNA. Photograph: Cold Spring Harbor Laboratory Archives/The New York Times

Everyone has heard of the seven wonders of the ancient world. Today I present my verdict on seven wonder discoveries in biological research, listed in rough chronological order.

Wonder 1: Cell Theory
Cell theory, formulated in 1839, made three assertions: (a) All organisms are composed of basic units called cells; (b) The cell is the basic unit of structure and organisation in all living organisms; (c) New cells arise only from pre-existing cells.

Wonder 2: The Theory of Evolution Through Natural Selection.
This is the most significant-ever insight into biology and was jointly proposed in 1858 by Charles Darwin (1809-1882) and Alfred Russell Wallace (1823-1913). It was already known that life on earth changes over long time periods. The theory of evolution explained the mechanism underpinning these changes – natural selection. This theory draws all biology together into one unified framework. In its absence, biology would be reduced to a vast catalogue of unrelated observations.

Wonder 3: The Chemistry of Life
Life, unlike mechanical machines, works close to room temperature and without the assistance of significant temperature or pressure gradients. How then do cells grow, divide and create local order in a world that otherwise moves towards increasing disorder? This question was answered by biochemistry – the chemistry of life.

A living cell is the end product of co-ordinated reactions between its innumerable chemical constituents – metabolism. These reactions must proceed fast enough at room temperature to sustain life, and this is enabled by protein catalysts called enzymes, discovered in the 1800s. Cell metabolism is driven by energy, ultimately supplied by sunlight.

Wonder 4: Antibiotics and Vaccinations
Antibiotics, discovered in 1928, are used to kill pathogenic microbes, and vaccination to provide immunity against disease has been in widespread use since 1900. Vaccination has eliminated many deadly diseases, including smallpox and polio.

Wonder 5: Discovering the Structure of DNA
Faithful inheritance of parental characteristics by offspring is essential for biological evolution. The nature of the cell’s hereditary material was identified as nucleic acid (DNA) in 1944. In 1953, James Watson (born in 1928) and Francis Crick (1916-2004) made the greatest biological discovery of the 20th century when they solved the structure of DNA, a discovery that also indicated how DNA replicates and transmits genetic information from generation to generation.

DNA is a long molecule made of four sub-units A,T,G,C. Genetic information is encoded in the linear sequence (genes) of these subunits, dictating the structure/activity of all cell proteins, including all enzymes, thereby controlling the activities of the cell. Understanding DNA unlocked the secret of the molecular logic of life.

Wonder 6: Cloning
Every animal body cell, including cells of the early embryo, contains a full set of the animal’s genes. Therefore, inducing any body cell into developing as embryonic cells develop should produce a genetic copy of the animal – a clone. In 1996 Dolly the sheep was cloned in this manner.

Wonder 7: Induced Pluripotent Stem Cells
The human body is composed of over 200 tissues/organs – skin, liver etc. Each tissue cell is differentiated to do a particular job. But all tissue cells develop from embryonic undifferentiated pluripotent stem cells.

IPSCs have huge potential in many areas, eg regenerative medicine. New organs could be grown from patients’ own IPSCs to replace failing organs and without fear of immune rejection.