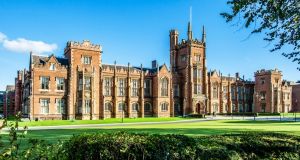 Some of the astronomers who made the discovery are based at Queen’s University Belfast. Photograph: Getty Images

Astronomers, including at Queen’s University Belfast, say they have made a historic discovery after detecting gas molecules in a 4.6 billion year old comet which has tumbled into our solar system from another star.

It is only the second interstellar object ever discovered and the first time gas has been noted in such an object, according to Professor Alan Fitzsimmons of the Astrophysics Research Centre at Queen’s.

“For the first time we are able to accurately measure what an interstellar visitor is made of, and compare it with our own Solar system,” he said.

Since then, studies have shown it is not orbiting the Sun, but passing through the Solar system on its own path around our galaxy.

Using the William Herschel Telescope on La Palma in the Canary Islands, Mr Fitzsimmons along with other astronomers from Europe, the United States and Chile first detected the gas in the comet last Friday.

“A spectrum allows us to detect individual types of gas by their spectral fingerprints,” he said.

“We received the data at midday and by 5pm that evening we knew we had successfully detected gas for the first time.”

The gas is cyanogen, made of a carbon atom and a nitrogen atom bonded together, which is relatively common in comets.

Dr Emmanuel Jehin, of the Universite de Liege, who is also monitoring the comet using the TRAPPIST-North telescope in Morocco, said they are used to seeing comet images “but this one is so special”.

“Looking at it nearly every morning for two weeks now, I’m fascinated by the fact this object is not like the many others I have been observing, but is truly coming from another star probably very far away,” he said.

The astronomers believe the comet was born 4.6 billion years ago.

As it approaches the Sun it will become brighter and more visible, allowing further studies.