New study finds asteroid among most energetic events ever recorded 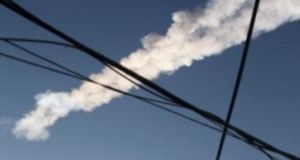 A fireball which burned up over Russia last February generated shockwaves which circled the globe twice. Photograph: www.chelyabinsk.ru/Reuters

A fireball which burned up over Russia last February generated shockwaves which circled the globe twice.

A new study published in Geophysical Research Letters describes the asteroid as “among the most energetic events ever instrumentally recorded” since a 1908 Tungsuka fireball at Siberia.

The “infrasound returns”or ultralow frequency sound waves from the fireball were detected by 20 of the International Monitoring System’s stations.

It is the most energetic event ever detected by the infrasound network, the study has said. The IMS is a worldwide network of observational technology to help verify compliance with and detect and confirm violations of the Comprehensive Nuclear Test-Ban Treaty .

The multiple reverberations of the waves explained the long signal duration of almost three hours, the study said.

The asteroid on February 15th broke up above the city of Chelyabinsk about 1,500km east of Moscow leaving more than 1,000 people injured. The event’s shockwaves blew out windows and damaged buildings in several cities.

It was 17 metres in diameter when it entered the atmosphere and travelled over Russia at a speed of about 20km/second,