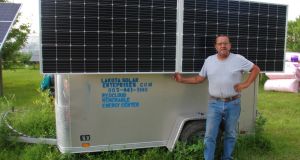 Down a dirt track on South Dakota’s bucolic Pine Ridge Reservation, Henry Red Cloud is working out a plan to help Native and indigenous communities around the world make their own electricity.

Through his Red Cloud Renewable Energy Centre, Red Cloud hopes to one day supply all 562 federally recognised tribes in the US, and eventually further afield, with cheap electricity from solar farms and panel-mounted, mobile trailer power banks.

With poverty levels and infrastructure on Native American reservations at developing world standards, the cost of electricity disproportionately affects Native communities in America, many of whom live on isolated prairies which further contributes to the cost of electricity delivery. Then there’s the poor quality of housing – the vast majority of homes on reservations are prefabbed trailers ill-equipped for the brutal Northern Plains winters. It means that not only are residents faced with high charges just to get electricity to their doors, keeping their homes warm makes for cripplingly expensive heating bills.

“We’ve always focused on the sun – in our language, our culture, our ceremony, our song,” says Red Cloud, seated under a covered pavilion on his compound. “It’s always been there. We have our annual sun dance, there’s a relationship there that goes back centuries, eons. We’re taking this new way and honouring the old way in a sustainable way.”

A fellow at MIT’s Solve incubator, Red Cloud became involved in solar energy after several friends tried setting up wind energy projects on reservation land in the 1990s. “I followed them a little and started doing research on my own, and found that wind is costly and there’s too many breakdowns; people can’t get the necessary technical support to refurbish and maintain the infrastructure,” he says. “Getting power generated [from wind farms] on to the transmission lines is a huge issue. So, [instead] I started looking at residential-scale rooftop solar.”

Red Cloud started manufacturing solar products in 2003 and has since created 13 jobs on a reservation where unemployment stands at between 80 and 90 per cent. He says he works with 37 other federally recognised tribes on residential clean energy and solar power. Red Cloud also helps with disseminating technical support and training on other reservations. “They can start stimulating the economies in their own communities,” he says.

So far, the centre has manufactured and sold almost 5,000 solar air heaters. His mobile solar battery trailer, ideal for festivals or off-grid living, produces five kilowatts of electricity that’s accessible through 30 110-volt outlets. “It’d run a third of your house, easily,” he says.

Red Cloud says nations and tribes around the US are excited by solar’s potential. “Energy sovereignty is important because as a nation, we can produce our own power. We can reach energy independence before mainstream America,” he avers. His involvement with MIT has seen one air-heater model taken to Boston where researchers are working to advance its productivity and effectiveness.

The drive for energy independence facilitated by scientific advancements is rapidly gaining ground among indigenous communities across North America. In Nebraska, the Winnebago Tribe operates a 400 kilowatt solar farm, while in Wisconsin, the Forest County Potawatomi Tribe boasts 1.61 megawatts of solar output. In Canada’s Manitoba province, the Fisher River Cree Nation opened a solar farm of almost 3,000 panels in July.

The growing demand and interest among indigenous communities is happening at a time when a scientific breakthrough, as presented in the journal Nature Chemistry in September, is set to open the door to a new generation of solar energy devices. By using organic molecules that generate two “excitons” that live much longer compared to current solar-to-electricity conversion processes, efficiency – the amount of sunlight a solar cell can convert to electricity – can be raised to as much as 44 per cent.

“Currently, good solar devices achieve around 17 per cent efficiency,” says Luis Campos, a co-author of the study and head of the Campos Research Group at Columbia University. “Once you translate the 1cm x 1cm to large-scale solar panels, you get a lot of losses [in efficiency]. We’re trying to overcome the limits [of] the engineering materials involved.”

Henry Red Cloud was honoured in 2014 by the Obama White House as a “Champion of Change” for his contribution to the provision of better solar energy infrastructure. His pioneering work continues to bring solar to many rural communities.

Some 540km north of Pine Ridge, in Standing Rock Reservation, the biggest solar farm in North Dakota has been erected just this year, a stone’s throw from where the Dakota Access Pipeline protests drew international headlines three years ago. Situated on nine acres outside the community of Cannon Ball and close to the reservation’s northern boundary, the farm of 1,100 solar panels boasts an output of 300 kilowatts. It supplies local municipal buildings on the reservation with electricity, helping save the community about $10,000 (€9,100) in its first year.

Led by Cody Two Bears, the founder of the non-profit Indigenized Energy, these efforts in Standing Rock have attracted publicity and visits from Hollywood actor Mark Ruffalo, band members from Mumford & Sons and US Democratic presidential candidate Tulsa Gabbard.

“When I first started, I wanted to put panels right on [people’s] homes,” says Two Bears while showing The Irish Times around the solar farm. However, because the federal government owns around 90 per cent of all residential buildings in Standing Rock that wasn’t possible. “We’re not able to put solar on or anywhere around them yet. So that’s why we have to make an impact with this [solar farm] today.”

He says the next step is to put solar panels on public buildings, schools and service and community centres around Standing Rock, and to develop a training schedule. “Communities like this aren’t able to sustain something like this, they aren’t able to manage it. But that’s why Indigenized Energy was born, to provide free training to our membership on how to use solar.”

Back on Pine Ridge Reservation, Henry Red Cloud is still recovering from several rounds of extreme weather events that pummelled his business and home. Twelve months ago, much of his equipment was damaged during a storm of golf ball-sized hailstones (though miraculously not the solar panels). Then, last March, much of his work and equipment were flooded out when a combination of a “bomb cyclone”, snowmelt and frozen, impermeable ground resulted in close to $250,000 (€227,000) worth of flooding damage. “We’re still in a state of recovery,” says Red Cloud. “The shop, tools, trailers, vehicles and manufacturing supplies on the compound, they were all damaged or destroyed.”

On top of that, the ongoing US-China trade war makes getting access to solar equipment more difficult. Red Cloud says he’s in the process of making direct contact with manufacturers in China whom he hopes will show him how to make solar panels. That, he believes, would help keep costs down while circumventing President Donald Trump’s tariffs.

“Most of our solar energy material is Chinese-made, bought before the trade war,” says Red Cloud. “China brought the market down [to a price] whereby everyone can start lessening their carbon footprint and start doing something with clean energy. A lot of people today want solar. A lot of people.”