The physicist, who died in February, worked with Nasa to protect astronauts from radiation 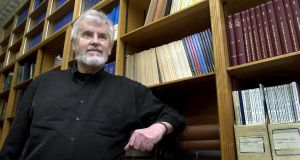 If you are resorting to virtual table quizzes to break the Covid-19 lockdown boredom, try this question: who links these three things – moon rocks, high-energy physics and watercolour painting?

This is a tricky one unless you knew that an Irish scientist was among the very first in the world to receive and begin analysing the moon rocks brought back by Neil Armstrong on board the Apollo 11 spacecraft.

The link in this case is Prof Denis O’Sullivan, a high-energy physicist based at the Dublin Institute for Advanced Studies (DIAS). He got his PhD at the institute back in 1966 and was still an emeritus professor at the institute right up to his death on February 27th last.

He built a career on the study of cosmic rays, ephemeral but powerful particles that travel at close to light speed and reach us from the sun and sources in deep space. Astronomers speculate about where they come from, for example supernova explosions and other cataclysmic events out at the fringes of the universe.

While we don’t know the source, we do see the results in the form of incoming cosmic rays. These are mostly protons but some are much heavier atomic nuclei and because of their speed they are extremely powerful – and potentially damaging.

Lucky for the residents of Earth, the planet’s magnetic field channels cosmic rays away towards the poles and almost all the rest are rendered near-harmless by our atmosphere.

That is fine for us down at the surface but the higher you go – for example up a mountain or in a commercial aircraft – the higher the radiation exposure. You absorb about one chest X-ray’s worth of radiation in a flight from Dublin to New York. Now move higher still, up to where astronauts orbit. Radiation levels climb with altitude and the flux of cosmic rays increases to the point that they pose a serious safety risk. Beyond the atmosphere there is nothing to protect you in the event of a solar flare.

It was in this research area – measuring and studying cosmic rays and developing devices to capture data – that Denis O’Sullivan worked, and at such an advanced level that he became of interest to the US National Aeronautics and Space Administration (Nasa). It was moving quickly towards a manned flight to the moon and it wanted to better understand radiation exposures in open space beyond the protections offered by Earth.

At this time O’Sullivan was studying ways to use specialised plastics to measure radiation exposure, working with institute colleague Alex Thompson. O’Sullivan temporarily moved on sabbatical to the research lab of P Buford Price at University of California, Berkeley, where similar work was being done. Nasa agreed to support research with Price for the development of detectors and O’Sullivan was a central part of the team.

He was there from 1969 through early 1972 and the team developed a device that could measure cosmic radiation. It needed refinement so could not fly on Apollo 11 but versions were carried to the moon fixed to the leg of the moon lander on Apollo 16 and 17. One of the devices brought back from the moon is now on display at the National Museum.

This work put O’Sullivan at the forefront of radiation detection and safety and established a research link with Nasa that carried throughout his long career.

And what of the watercolours? O’Sullivan took up painting in the 1950s and became an accomplished artist, exhibiting at the royal academies in Dublin, London and Belfast.

Denis O’Sullivan was on research sabbatical at University of California, Berkeley in 1969; a classic case of being at the right place at just the right time. He was in the lab of P Buford Price who had just agreed a research project with Nasa to develop detectors to measure radiation exposures to astronauts. O’Sullivan had been involved in similar work in Dublin and the race was on to develop them.

It was an exciting time in the lab but also on the tumultuous Berkeley campus. It had long been a hotbed of protest and dissent and O’Sullivan witnessed student marches, police charges and the arrival of the California National Guard.

He had taken up a research position and was there with his wife, Carmel Madden, and children Tanya and Gavin, who were little more than toddlers at that time.

The cosmic ray detectors were blocks of a specialised plastic that when struck by a cosmic ray particle would excavate a telltale track in the block. The more particles colliding with the detectors, the more tracks and the more information. It was not simply a counting operation; the tracks provided a wealth of data that helped to identify the particle causing the track.

O’Sullivan had also studied whether cosmic ray tracks could be trapped by other materials and this opened up the possibility of searching for tracks left behind in moon rocks.

The rocks brought back from the moon in question arrived early in 1970 and O’Sullivan was in the midst of it with Price and his team looking for cosmic rays from the sun, and O’Sullivan looking for cosmic rays from deep space. He continued this analysis on his return to Dublin working with his long time collaborator Alex Thompson. This work ensured that DIAS was in the international spotlight as a leading research centre.