Georges Lemaître: the Belgian priest who preached the Big Bang 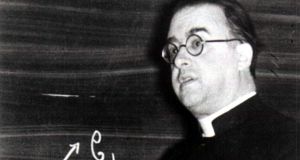 As pointed out by Brian Maye in a recent article in this newspaper, this month marked the 50th anniversary of the death of Monsignor Georges Lemaître, the Belgian cleric and physicist who first suggested the theory now known as the Big Bang model of the universe. How did it come to pass that one of the most famous theories of modern science was first proposed by an obscure Belgian priest?

Lemaître was born in Charleroi, Belgium, in 1894. After attending the Jesuit secondary school there, he studied civil engineering at the Catholic university of Louvain. These studies were interrupted by the outbreak of the first World War. After serving as an artillery officer in the Belgian army, he switched to mathematics and physics, completing a master’s degree in one year.

In 1920 Lemaître entered the seminary of Malines to study for the priesthood. He was permitted to continue his studies in physics, specialising in the field of Einstein’s general theory of relativity (the modern theory of gravity). He was ordained a priest in 1923. He won a prestigious scholarship to study with Arthur Eddington, a world-renowned authority on astronomy and general relativity at the University of Cambridge. Following a glowing recommendation from Eddington, Lemaître was accepted for further studies in astronomy and cosmology at Harvard University and at Massachusetts Institute of Technology.

At this time, a great upheaval was taking place in the world of astronomy. Thanks to the pioneering observations of American astronomers such as Edwin Hubble and Vesto Slipher, it was becoming clear that distant astronomical objects known as “spiral nebulae’ constituted distinct galaxies far beyond the confines of our own Milky Way, and that these distant galaxies were racing away from us at high speed.

Lemaître’s first great contribution to science was to provide a convincing explanation for this bizarre phenomenon. Displaying a stunning mastery of Einstein’s general theory of relativity, he showed the theory predicted an expansion of space on the largest scales. He concluded that the runaway galaxies were a manifestation of this stretching of space. This ground-breaking proposal did not receive much attention at first, but with the publication of Hubble’s definitive observations of the nebulae in 1929, the community took notice. By 1931 most researchers in the field had accepted the astonishing idea of an expanding universe.

So, Lemaître’s model of a universe that was once a primeval fireball received little support from the community for 30 years. However, in 1965, radio astronomers at Bell lab reported the discovery of a ubiquitous background radio signal of unknown extragalactic origin. With the help of some colleagues at Princeton University, it was eventually realised that the mysterious signal constituted radiation left over from a universe that was once much smaller and hotter: the first direct evidence of the primeval fireball.

Today, intense studies of this “cosmic background radiation” by giant terrestrial and satellite telescopes have yielded an astonishingly detailed picture of our universe as it was billions of years ago. However, it should be pointed out that such studies tell us little about the origin of the universe. Indeed, the term “big bang” is one of science’s great misnomers: how the universe got into the state of a concentrated fireball remains beyond the reach of science at this time.

As for Lemaître, he lived just long enough to learn of the discovery of the cosmic background radiation on his deathbed. History does not record whether he said “I told you so”.