Drug developed in Cork that could reverse extreme weight loss 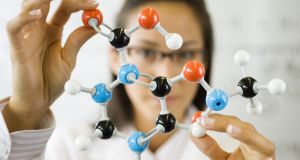 Scientists in Cork have discovered a drug that increases appetite, in a development they believe may point the way to a drug that can trigger weight loss. File photograph: Getty Images

Scientists in Cork have discovered a drug that increases appetite, in a development they believe may also point the way to a drug that can trigger weight loss.

The work at University College Cork (UCC) has the potential to reverse weight loss caused by severe illness or in those with anorexia.

However, the scientists also believe their work may lead towards a drug that can induce weight loss, something which would be hugely important given the rising rates of obesity.

The work focuses on the “hunger hormone”, ghrelin, which controls appetite, said Dr Gerard McGlacken, who is based in UCC’s department of chemistry.

Ghrelin levels rise and connect to cells in the stomach in order to stimulate appetite. The levels reduce after meals.

A problem arises if extreme, involuntary weight loss is involved, in a condition called “cachexia”.

It is seen in those with advanced cancer, kidney disease and many other illnesses.

The loss of muscle mass is also a common feature of ageing, Dr McGlacken said.

Dr McGlacken studied a group of molecules called pyridones that occur throughout the body.

He found one similar to ghrelin and wondered whether it could work like ghrelin to stimulate appetite.

“One of these had activity and we tweaked it to give it more activity,” he said.

“There is no drug on the market which can achieve this and very few in the pipeline.”

He linked up with UCC colleague Dr Harriet Schellekens, of the neuroscience and anatomy department, to test the compound’s biological activity in mice.

They found the mice “increase their food intake in a statistically relevant manner” when given the compound, said Dr Schellekens, who also works in UCC’s APC Microbiome Institute.

This could be used in the treatment of cachexia, but also in those suffering from anorexia, “although of course that is a more complex condition”, Dr McGlacken said.

Finding similar compounds that have the opposite effect in order to aid the treatment of obesity “is another potential avenue open to us”, he said.

Being able to prove that the compound actually works is hugely important, Dr Schellekens said.

Potential drugs often work in the lab, but “fail to perform in real-life biological systems”.

Another advantage is the “simplicity of structure” of the compound, making it easier to make in the lab, said Dr McGlacken.

The work was published in the journal Scientific Reports.

Funding for the research came from Science Foundation Ireland, the Irish Research Council and the APC Microbiome Institute.