Only 5 per cent of Ireland’s night skies are free from artificial light, says expert 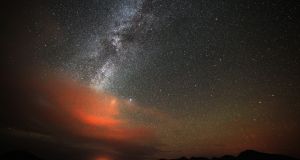 Only 5 per cent of Ireland has pristine night skies free from artificial light, according to a Trinity College Dublin professor leading the first survey of night-time light.

Prof Brian Espey of Trinity College School of Physics also said that just under half of Ireland’s population lives under skies so bright that the Milky Way cannot be seen.

The survey of the extent of night-time lighting across Ireland was announced on Thursday, and the results will feed into studies of prevalence and influence of light on the environment and its role in human sleep disruption.

Critically, “we probably have more light than we need”, said Prof Espey, while people are generally unaware of the amount of light they are exposed to, and of its economic and environmental costs.

“Our citizen science survey has been designed to obtain the first national data on the amount of night light, its influence on our sleeping patterns and local ecology, and also the general public’s perceptions of the night-time sky,” he explained. Members of the public have been invited to participate.

Modern society depends on light in many forms; from high-intensity natural daylight and artificial lighting, to the glow of TV screens, computers, tablets, smartphones, and games. “Light is so ubiquitous – and generally travels unseen (except, for instance, in fog) – that we often take it for granted,” Prof Espey said.

Over recent decades, however, use of energy for lighting has been increasing and science has realised light has a significant influence on our health, he pointed out – “think seasonal affective disorder, or SAD – as well as [how light is] affecting plants, animals, and insects”.

Take the Light at Night survey

“We’ve grown used to seeing really pretty images of the world at night from space due to tweets by Chris Hadfield, Tim Peake, and other astronauts,” he said, but negative aspects of artificial night light were less recognised.

“Only 5 per cent of the country can now be classed as having pristine night skies, while just under half of the population lives under skies so bright that the Milky Way cannot be seen at all,” Prof Espey said.

Since the introduction of electric light in the 19th century, spread of lighting has been continuous in amount and intensity. In Ireland, light emission has nearly doubled since 1990 - exacerbated by the Celtic tiger period.

A push to reduce energy and carbon emissions has, however, led to roll-out of more energy-efficient LED lighting. “Done properly, this could reduce both energy and carbon use. With every development, however, there is a possibility that cheaper energy will lead to increased consumption,” he added.

To monitor current light levels and their impact, scientists at the TCD School of Physics; University College Dublin and Maynooth University, as well as the Mayo Dark Skies group, are looking “to determine the amount and type of lighting in our environment, how it affects both sleep patterns and the natural environment, and our attitudes to night-time activities”.

During the day space photos mainly show the geography of the country, but at night the influence of human activity is much more apparent as diverse areas are lit up, Prof Espey said. Street lights in the Smithfield area of Dublin, for example, can be clearly seen from space.

While some light is necessary, there is much that is either too bright, lighting the wrong location, or on outside during periods when it is no longer useful, ie is light pollution.

Excessive use of light takes its toll in terms of increased CO2 production as well as in direct impact. “Examples of this impact include trees undergoing budburst earlier and retaining leaves later; disruption of bird feeding patterns and migration, insects and bats being attracted to lights (particularly blue-rich lamps), and potential human sleep disruption,” he said.

Loss of true dark skies also reduces human contact with the natural environment and affects our appreciation of night skies.

Dark skies, ie natural light, have become a valuable commodity not just to enhance the view of stars and planets from Earth, but also as a form of sustainable tourism.

The survey is part of a citizen science initiative led by Trinity College Dublin and The Irish Times – it is supported by the EPA and Science Foundation Ireland.