When the water crisis erupted five years ago in Flint, no one knew which, where or how many of the city’s 55,000 occupied properties had lead pipes 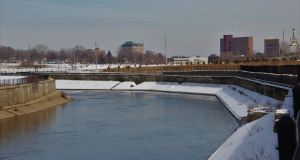 The Flint river which city authorities began using as a water supply in 2014. Photograph: Stephen Starr

Five years ago this month, the US city of Flint began its descent into water hell. In April 2014 emergency administrators, charged with saving the cash-strapped city money, switched its water supply from the same source used by Detroit to the Flint river. The temporary move, the administrators estimated, would save Flint about $5 million (€4.4 million).

At least 12 people died, and dozens became ill in 2014-2015 after contracting Legionnaire’s disease, a severe form of pneumonia caused by water-borne pathogens.

In a city where close to half the population lives in poverty, Flint found itself facing an enormous and expensive task. At the outset of the crisis no one knew which, where or how many of the city’s 55,000 occupied properties had lead pipes. Municipal water pipeline records were outdated, incomplete or missing. A third of the city’s homes lay empty. How could authorities precisely and inexpensively locate the dangerous pipes, or even begin to grasp the scale of the problem?

In 2016, a team of data scientists stepped in to help with the mammoth task. The brainchild of Jacob Abernethy, a computer scientist at Georgia Institute of Technology, and Eric Schwartz, a professor of marketing at the University of Michigan, the ActiveRemediation project uses machine learning – artificial intelligence that “trains” computers to make human-like decisions – to interpret dozens of datasets in order to predict where the lead pipes are most likely to be.

“Some of the initial questions were around how do you decide whether to go to home A or home B,” says Abernethy. “So, academically it was an interesting question to find out how we’d go about that.”

With digging up and replacing service pipes for a single home costing upwards of $5,000 (€4,470), in part because they’re buried up to six feet deep, locating each offending pipe immediately became a critical goal for city authorities.

The ActiveRemediation team started by developing a web and mobile app that contractors and residents used as a platform to collect information about the water emergency. Abernethy and Schwartz asked city officials for water service records as well as details on property age, ownership and value.

Trawling through the city’s water department archives in 2016, officials uncovered a trove of 120,000 hand-written work record slips, some dating back more than a century. Old maps depicting water service lines were also uncovered.

Working with city authorities, the researchers used these datapoints – more than 70 in all – as the foundation for their statistical modelling. It wasn’t long before they produced some alarming approximations: as many as 75 per cent of Flint’s properties could have lead or galvanised service pipes.

The project proved to be accurate with 70 per cent of its predictions, potentially saving the city, already in emergency financial management, as much as $10 million (€8.9 million).

As the scale and complexity of the crisis began to unfold and the plight faced by Flint’s residents garnered global attention, state and federal funding began to roll in. The city embarked on the FAST Start pipe replacement programme in 2016 with $25 million (€22.3 million) in state funding. Part of the programme involved hydrovac inspections – high-pressure water shot into the ground to soften up the earth before vacuuming it up into a waiting truck – to identify whether subterranean pipes were lead, galvanised or copper.

The hydrovac initiative was cheap, often costing as little as $250 (€223) per inspection, and provided important data to Abernethy and his colleagues. But because it could not penetrate concrete or asphalt surfaces, it proved only partially effective, and was discontinued last summer.

Despite the ActiveRemediation project’s success, the process has been far from straightforward. The maps of water service lines are more than 30 years old and for years city officials failed to keep proper water service records. Though residents began to complain of brown and odorous water coming from their faucets shortly after the switch to the Flint river, city authorities didn’t switch off the supply until October 2015, more than 18 months later.

With $167 million (€148 million) in funding eventually allocated to the crisis, the city was under pressure to spend, and set about bringing in excavation and engineering contractors to speed up the pipe replacement process. One of the major contractors involved, AECOM, stopped using the machine-learning predictive model fine-tuned by Abernethy, Schwartz and colleagues and instead began to search for and remove water lines on a block-by-block basis.

Last year, however, reports emerged that 80 per cent of the lines excavated were, in fact, copper pipes that pose no threat to human health. With both the hydrovac inspections and the machine-learning model sidelined, the rate of lead pipe detections fell to 15 per cent, wasting further time and money.

Beneath the surface of Flint’s water crisis lies a long-standing culture of indifference and mismanagement by city and state leaders. Already faced with high levels of poverty and inequality, Flint’s residents were angered at having to spend hours queuing for bottled water. That anger was fuelled again when reports emerged in February that contractors privately expressed their wish to work only in the most convenient and lucrative parts of the city.

In January, AECOM sought an additional $4.8 million (€4.3 million) to oversee the pipe replacement project for 2019, but under public pressure the city council voted not to extend the contract.

Within weeks the city returned to the ActiveRemediation project. “We provided them with a draft prior list about a month ago,” says Abernethy. “I would expect that by now they would be using it.”

A key aspect of the project is that the more data and information it receives, the more accurate its predictions become, says Jared Webb, a data scientist and researcher at the University of Michigan, and a central cog in the ActiveRemediation project. “In 2019, our accuracy predicting the number of homes that are dangerous – that are high priority – is 88.6 per cent,” he says.

Despite officials last year declaring Flint’s water safe for use again, thousands are still choosing to use bottled water. Flint’s water service providers charge some of the highest rates in America. The broader challenges haven’t gone away. Of the 30,000 service lines believed to need replacing, only 10,155 have been completed. An additional 27,717 water meters have recently been slated for replacement.

And while ActiveRemediation and other projects have helped make significant inroads in replacing service lines, the extent to which contaminated water has affected the plumbing inside people’s homes remains a worry.

“You’ve got to think about inside our homes,” says Ariana Hawk, a Flint resident and civil rights activist. “The refrigerator, the plumbing – everything inside your home – needs updating or replacing, and they’re [the city] not helping us with this.”