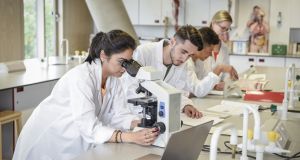 Ground-breaking basic research in the Republic is to benefit from €12 million in State funding with 12 leading researchers each benefiting from €1 million for new projects.

These range from new approaches to breast cancer treatment, to development of 3-D printed batteries, and digitally mapping the full range of cultural activity in early modern Ireland.

The funding is being allocated under the Irish Research Council (IRC) Advanced Laureate Awards to conduct leading-edge research in life sciences; physical sciences and engineering; the arts, humanities and social sciences. It was announced by Minister for Education Joe McHugh and Minister of State for Research and Development John Halligan.

IRC director Peter Brown said the researchers were all exceptional in their fields and had been selected following a rigorous and independent international peer-review process.

“A total of 140 applications were received under this funding call. In addition to the 12 funded awards, a further 48 proposals were deemed to be excellent and fundable by the international panels of experts. This illustrates the high quality of researchers and the calibre of proposals being generated in frontier research in Ireland.”

The overall gender breakdown of awardees was 75 per cent male and 25 per cent female. “The gendered distribution of research grants at the advanced career stage is a very real issue, both in Ireland and internationally,” Mr Brown admitted.

Although this was similar to benchmarks such as the European Research Council (ERC) advanced grant, no one could be satisfied with the current imbalance, he added. “Ireland is now taking major steps to address the gender disparity in senior research and academic positions, as outlined in the Gender Equality Taskforce Action Plan.”

The Irish Universities Association welcomed the announcement. Its director of research and innovation Dr Lisa Keating said the awards “should be embedded as annual calls, as they had the potential to improve Ireland’s performance and enhance the success of Ireland-based researchers in competing for prestigious grants from the ERC and in Horizon Europe”.

Mr McHugh said the IRC programme was designed to address gaps in the Irish research and innovation landscape in “frontier basic research”, as identified in Innovation 2020, Ireland’s five-year strategy for science and technology, research and development.

Funding frontier research was vital “to compete with our counterparts on the global stage, and to promote Ireland as an attractive location for world-class talent, both homegrown and international, in order to bring new knowledge, skills and innovations to our research institutions”.