A clash between birds and green energy

As renewable energy gains traction here, environmentalists are working to mitigate the negative effects wind and tidal projects can have on certain species 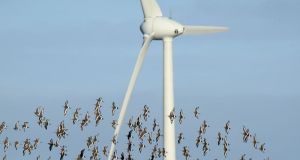 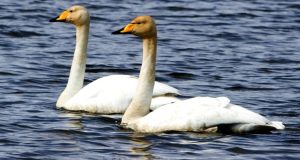 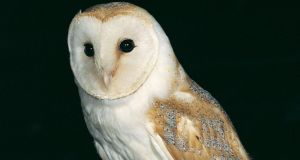 We are on target to meet our renewable energy obligations for 2020.

However, the rollout of new energy infrastructure comes with consequences, particularly for migratory birds. Climate change serves as the single biggest threat to bird species worldwide. Research has shown declines of up to 90 per cent in certain populations and total reproductive failure in others as a result of climate change.

In order to mitigate climate change, renewable energy must be prioritised. Under the European Union’s Renewable Energy Directive, Ireland is obliged to ensure that 40 per cent of electricity is generated from renewable resources by 2020.

Wind energy will be the main player, accounting for over 85 per cent of total renewable generation, according to the Sustainable Energy Authority of Ireland.

The authority estimates that Irish wind could supply 2.5 per cent of EU electricity demand, create 20,000 jobs and generate €15 billion for the Irish economy by 2050. But more often we hear about the negative effects of turbines and power lines, particularly for birds.

Collision is the hazard most often cited, but, according to Dr Shane McGuinness, a member of the policy and advocacy team at Birdwatch Ireland, displacement, habitat loss and barrier effects pose a much greater threat. These can pose a significant problem for migratory birds that must follow certain paths to reach specific breeding sites.

“These factors are harder to quantify and so don’t get as much attention,” says McGuinness. “They cause birds to change their migration paths and so impose an excess energetic demand which is harmful.”

Any change to an environment will have an effect. “Tidal energy systems may disturb fish schooling areas where seabirds come to feed. Solar energy would also have a much greater impact in terms of habitat modification but most solar in Ireland is at lower level,” says McGuinness.

Renewable energy is a double-edged sword for birds, but measures are being taken to safeguard our migratory species.

Certain design features can prevent collisions from occurring, says Siobhán Egan, policy officer for Birdwatch Ireland. “There are guidelines about how far apart wires should be on power lines, for example. You can also use round discs to make them more visible, or scaring devices.”

In order to minimise the other three threats, Dr Ken Boyle, chair of the master of science degree in sustainable development at Dublin Institute of Technology, says responsible site selection is key.

“We know what the migration routes are, and they are the areas that should be avoided,” says Boyle.

Before a site is approved, an environmental impact assessment must be undertaken by planning authorities and environmental experts. To assist the planning process, Birdwatch Ireland has developed a wind-energy bird-sensitivity mapping tool, which highlights areas that are particularly sensitive for birds. The tool maps areas most sensitive to disturbance, based on certain key criteria.

However, Egan stresses that it is not intended to create a no-go area for wind turbines. “We support renewable energy. One reason we embarked on the mapping project is because we were frustrated that we were finding ourselves objecting to wind energy development,” she says.

Although the mapping tool may be one step in the right direction, she feels it can be improved upon if more survey work is done. “We couldn’t include some of the most vulnerable species on the map because we were deprived of data. For example, we didn’t have all of the information about the flight lines of the whooper swan.

“We are pushing for work to be done to plug these information gaps. Otherwise, we might be working in an information vacuum, which is very dangerous for everyone involved.”

Heavy investment is being pumped into tidal energy research, which is predicted to begin commercial production in 2017. Bearing this in mind, Birdwatch Ireland plans to develop a marine sensitivity map to highlight areas sensitive to seabird disturbance.

“We would like to get ahead of the curve with that. With wind, we are kind of chasing the tail of the industry,” says McGuinness, who has been working on the mapping tool with Birdwatch Ireland for the last nine months.

They also hope to create a sensitivity map that focuses on electricity transmission, but this depends on future resources.

For Dr Boyle, long-term monitoring after construction is crucial in order to fully understand the effects of energy systems on migratory birds.

However, he feels that energy production isn’t the only thing we need to consider. “Reducing energy demand is as important as our desire to generate more energy. That will be critical in the next few decades.”

FLIGHT FACTOR: WHY SOME BIRDS ARE VULNERABLE

Some migratory birds are more susceptible to the threat of energy structures than others. For example, birds such as the hen harrier, which travels to moorland or young forest plantations to breed, is particularly vulnerable to collision.

Research has shown that this is partly due to the bird’s visual field.

Due to their size and decreased ability to manoeuvre, birds such as whooper swans and geese are also more likely to be threatened by collision, while upland breeding waders such as curlews are the most at risk from habitat displacement.

With its mapping tool, Birdwatch Ireland identified the red-throated diver as the species most affected by wind turbines. This upland bird is a winter visitor to Ireland from September to April .

It is estimated that only six breeding pairs remain, and these are found in a small marginalised area in Donegal. McGuinness explains what makes this species particularly vulnerable.

“The red-throated diver is found on isolated lakes. When a nesting bird is disturbed, say when construction is taking place, it lifts from the nest but doesn’t return. Most other birds will return to their nests following disturbance.”

1 Speed and distance of Covid-19 droplets tracked by Mater researchers
2 Covid-19: Seventy cases in Cork traced to local pubs and restaurants in recent weeks
3 Prepare for six months of Covid-19 restraints, warn health officials
4 No joy for consumer with a faulty Husqvana chainsaw
5 Almost a third of Garda firearm discharges found to be accidental
Real news has value SUBSCRIBE